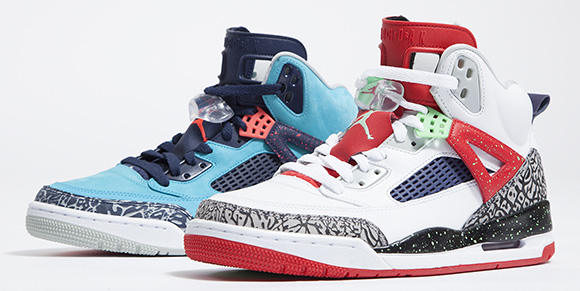 The Jordan Spizike’s will continue to roll out this year as we have a look at two more models slated for a Spring 2015 release.

The first model which is the pair closest to us features a white base and red accents which reminds us of the original pair released. Changing it up a bit, the brand adds what looks to be glow in the dark speckles on the midsole and then the same shade again on the tongue, eyelets, and lace lock.

In the back you can see the second Jordan Spizike which comes in powder blue that closely looks like the Jordan 3s. Midnight navy hits the toe cap, netting, tongue and laces while infrared hits up the lace eyelets and Jumpman on the tongue.

More information and images on both these Jordan Spizikes coming soon.