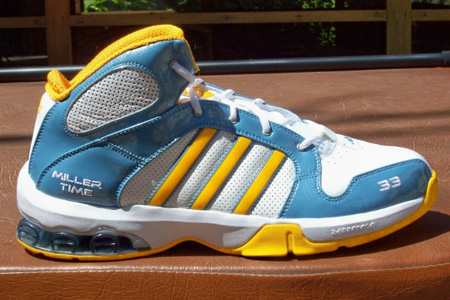 Fact: Minnesota Timberwolves forward Mike Miller might have his bellybutton pierced. Fact: Mike Miller’s adidas player samples fetch exorbitant amounts on eBay, and are sought after by MM fanatics worldwide, much like Ponce de Leon aggressively explored for the Fountain of Youth. Ai-ight. The latter is false for sure, but the former, I think that’s true. Can’t tell you when I saw Miller shirtless, but I think its better that we both don’t know. And even if you haven’t seen the T’Wolves forward topless, it’s hard not to appreciate his special make-up pair of adidas a3 Decade II’s from his disastrous Memphis Grizzlies days. (Well, to clarify, Mike is a perennial All-Star snub. The rest of his team was doo-doo however.) Much like the Grizz, the Decade Deux proved to be dismal performer on the ‘wood, as its a3-micro heel-oriented cushioning was unbelievably unresponsive, taking months to break in. Overall fit was horrible, because the lacing vamp was far too wide for the narrowly-set shoe. Traction and forefoot cushion were admirable, though!

Miller’s version was distinguished by a buttery sky blue/yellow color scheme and features his number, 33, inscribed along the forefoot. Highlights from the shoe include the translucent a3 pods that are highlighted with just a tint of sky blue. Sick. Oh, and “Miller Time” is stitched along the heel; don’t worry–we at Sneakerfiles aren’t really sure what “that” is, but we assume it’s some sort of ascension into hoops nirvana that only (alleged) belly button-pierced ballplayers would know about.