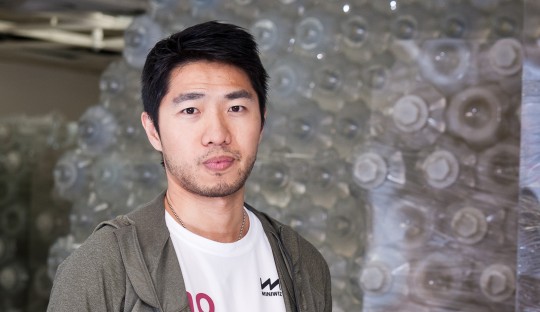 Nike Sportswear’s popular Flyknit Collective is headed east and will soon be making its debut in Shanghai.

Nike Flyknit redefines performance design in a way that reduces the waste created in manufacturing an upper and is incredibly comfortable, using reductionist process that is altering the way we look at developing footwear. Carrying the core ethos of Nike’s 40 years of innovation, but delivering new solutions by way of modern technology, the characteristics of Nike Flyknit technology can be applied to the arts too — a different kind of performance. The Nike Flyknit Collective was formed to offer a place for global innovators in different fields to use the 4 key principles of Nike Flyknit and apply and interpret them in a way that interacts and connects with local communities.

Leading regional innovator, architect, and designer Arthur Huang will join Nike’s Ben Shaffer and Dave Cobban, and leading Hong Kong multi-disciplinary architecture studio and project curator ESKYIU (Eric Schuldenfrei and Marisa Yiu) to unveil Huang’s unique installation within the confines of the Nike Festival of Sport in central Shanghai (August 23-26).  The Nike Festival of Sport is the largest grassroots multi-sporting event of its kind in the region, attracting more than 150,000 youths in four days during its inaugural run in 2011. It is attended by global icons such as Lebron James and Kevin Durant as well as local Olympians and the region’s top grassroots athletes who have qualified to compete in territory competitions.  Huang’s innovative “Feather Pavilion” will be featured as the artistic centerpiece of Shanghai’s Nike Flyknit Collective workshop series, which has already enjoyed tremendous success in Milan, New York, and London.

A visionary manifestation of the four key tenets of Nike Flyknit design (lightness, performance, formfitting and sustainability), Huang’s Feather Pavilion will serve to inspire ideas within the region’s young creative community, many of whom will be flown in to attend workshops conducted by regional/global visionaries, and also provide a unique experience for anyone wishing to try on the shoe at the Nike Festival of Sport.

NIKE FLYKNIT
Nike Flyknit is a paradigm shift. It changes the way performance footwear is designed, produced, and worn. Nike Flyknit is a technology that allows the upper to be created out of precisely engineered yarns — it is a sustainable revolution in the form of a new proposal for the human body.

These are the core benefits of Nike’s Flyknit innovation and the elements that have more broadly formed the foundation of Nike design for the last 40 years. These ideals require a constant evolution of problem solving through design.

These are not qualities that are coveted solely by athletes looking for the competitive edge. They are a set of fundamental principles of design, art, and architecture which prompted Nike to create the Nike Flyknit Collective: a platform for creatives in all fields to generate dialogue around, interact with, and ultimately enable them to express these principles through design in their own way and in their own communities.

The notion of physical activity will play a role in both the concept and execution phases. While the process itself is intended to inspire the creator, the ultimate goal is for the final expressions to inspire the communities around them in a new and transformative way. Innovators across different disciplines and cultures are invited to convert the abstract benefits of Nike Flyknit into practical, physical structures and spaces.

Nike introduces the Nike Flyknit Collective in Shanghai with a preview of Arthur Huang’s work that will later serve as a topic/installation at Beijing Design Week. This uniquely interactive installation in the pavilions of the Nike’s Festival of Sport space is an interpretation of Nike Flyknit’s formfitting, lightness, performance and sustainability properties that follows Ernesto Neto’s recent launch in London. What follows is a global rollout of commissioned works from other Nike Flyknit Collective members.