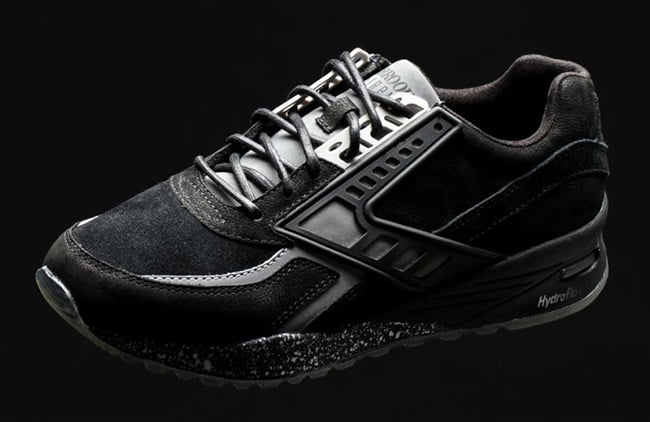 FairPlay which is based out of Los Angeles is collaborating with Brooks Heritage. The outcome is the FairPlay x Brooks Regent ‘Battle of Los Angeles’ release.

The ‘Battle of Los Angeles’ is said to have taken place on February 25, 1942, when an anti-aircraft aerial barrage caused a disturbance over the LA skyline. Although the US government acknowledged the incident as an attempt to take down a wandering weather balloon, many have theorized that it was an attack on the City of Angels by extraterrestrial forces. The “Battle of Los Angeles” colorway of the Regent Runner integrates elements of the story into its aesthetic with a deep black tone from the night skies, reflective 3M embellishments inspired by UFO spaceships and a speckled outsole that represents the spark of gunfire.

Looking closer, this Brooks Regent in collaboration with FairPlay features predominate Black while leather and suede compliment the shoes. Other details include 3M reflective details and speckles across the midsole for gunfire.

Another image of the FairPlay x Brooks Regent Battle of Los Angeles can be seen below. As for a release date, they will be available in February 2017.