Discussion: Loyal to a Fault 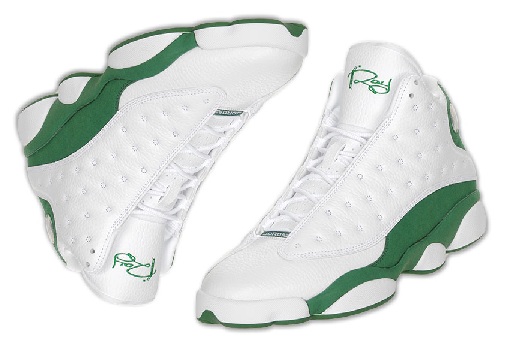 Its safe to say that a lot of people are pissed right about now. After tons of speculation, misguided sneaker news and hype out the you know what, the Air Jordan XIII ‘Ray Allen’ madness has finally come to an end.

This release will quite possibly be known as one of the worst, if not the worst, releases in sneaker history. Being sold in two states, we are not including the Hong Kong based early sellers, and Finish Line’s online store… this release left much to be desired.

Most of us were finally content with the fact that we would not have a chance at obtaining the Retro, that is until Finish Line decided to announce that they would have them for sale as an online only release only furthering the hype behind the bland White/ Green Retro.

The way Finish Line handled the release was mind boggling… to say the very least. Once the shoes hit the online store they were gone, fastest sell out ever. Now, most of you are pissed at Finish Line. Their Twitter mentions are absolutely hilarious at this point, I know people are genuinely upset but you have to understand that its just another pair of shoes.

What has started to wander through my mind however, is why would a Brand that claims they are loyal to their consumers do something like this to their fan base? Limited releases, limited quantities, available at limited locations… This is something we’ve grown accustom to. Yet, when a release is this scarce, there is far greater potential for individuals to get hurt. We all know what happened over the Nike Air Foamposite Pro ‘Retro’ aka ‘Electric Blue’ not too long ago. People were getting hurt and killed over a shoe that is still sitting in stores at this very moment, at least they are here in the Bay Area.

People do crazy things all the time over items that are trivial and materialistic, proof of this is strewn about throughout human history. Brands know this type of behavior erupts during releases such as this, so how are they not held accountable for their actions… aren’t they at least morally responsible? In my opinion they are being irresponsible for not even taking into consideration all of the chaos that follows certain releases knowing that there are people in this world that will take drastic measures to obtain items that are not a necessity in order to achieve some sort of monetary gain or value.

Something else to consider as well; Air Jordan XIII Retro’s were retailed at $160 in 2010 & early 2011, a shoe that originally retailed at $150 back in ’97/’98. This pair, which is one of the most bland of colorways, retailed at $175 and not one person had a problem paying that price. Don’t you think Jordan Brand is testing the waters to see how high a shoe can retail for before consumers oppose? We are already looking $160 Retro’s beginning with the Black/Cement AJ3’s, what’s to stop them from increasing the prices even higher in the near future?

Worst release in history, poorly mismanaged online & a Brand who is continuously showing disregard for its loyal fan base over the last 26 years…


Sneakerhead may be the wrong term for us after all… Its almost as if we’re being called ‘Air-heads’ behind the closed executive office doors in Beaverton, OR.