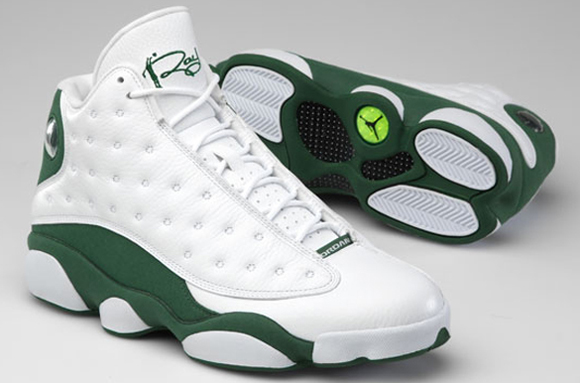 Exclusive sneakers, in my opinion, are great but are a little bit like a double edged sword…

With the announcement of the Air Jordan XIII ‘Ray Allen PE’ (and countless other exclusives before them) being an extremely exclusive release it makes you wonder why would a brand that wants to keep their consumer base happy keep such a release so exclusive that a majority of their consumers won’t even have a chance at obtaining a pair unless purchased from a reseller.

Like I said before, these types of releases are great at times. On one hand, it allows only the most dedicated the chance to own something exclusive. Yet, on the other hand it will only allow those who happen to live in that particular area or those willing and able to travel a chance at purchasing, making some fans of the brand that may live in other States and Countries disgruntled.

We can take the True Blue AJ3’s that released in 2009 as another example. That release was not exclusive per say, however, it was a release only available to those who lived outside of the U.S. While they eventually gave everyone a chance to own a pair earlier this month, it took 2 years and countless U.S. residents willing to pay a premium to obtain a pair for themselves… this almost seems like it was more profitable for the aftermarket resellers rather than the Brand itself who could have just released the sneakers worldwide and made their profit. Again, on the other hand, those of us who were patient enough to wait those 2 years were able to grab our sneakers (finally) at retail without hassle.

Exclusives are, again just my opinion, made and released for ‘the best of the best’ as far as sneaker enthusiasts/ collectors/ fans are concerned. Yet, it ends up leaving out a huge chunk of us who just can’t obtain the shoe due to its rarity.

More often than not, I wish for everyone to at least have a fair chance at purchasing a pair of shoes, no matter how rare or exclusive they are. Of course, that’s not always the case but it makes me wonder what everyone’s thoughts are about such releases.

With that said; what are your thoughts on exclusives, are they good or bad, do you not care either way? Does it only bother you when that exclusive shoe isn’t released in as many locations as they could so even if you wanted them you would have to purchase aftermarket?

Share your thoughts with us and let us know how you feel.