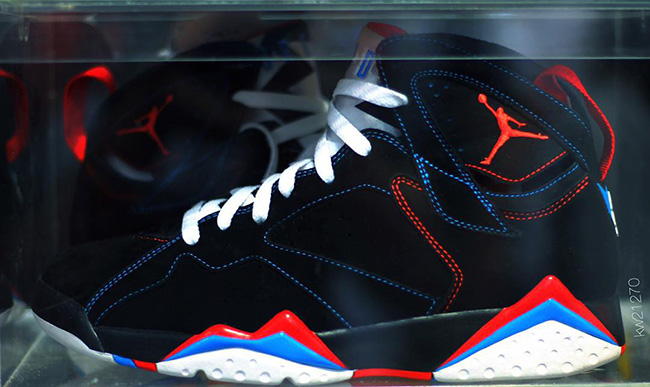 Since this is the year of the Jordan 7, why not give you a look at a past sample that could of been? Making a first appearance is the Air Jordan 7 Reverse Orion. You may recall back in 2011 Jordan Brand releasing a pair based off the similar color scheme, but instead they have flipped the colors around.

The Sample Reverse Orion takes on a full black nubuck upper instead of white leather that we saw upon the released version. In addition, the shoes have blue and red embroidery and outlined on the midsole. White lands on the outsole which was originally black. The sample will also use a white tongue and laces. Other changes include a now red jumpman and heel tab.

Do you think Jordan Brand should have released the ‘Reverse Orion’ Air Jordan 7, or are you happy with the color scheme they choose? Back when they released in 2011, they sat at retailers and didn’t move like the brand planned. Maybe we have answered our own question.