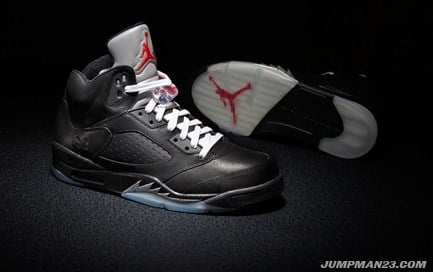 It’s not often that the consumer directly impacts the key design choices for our Jordan releases, but that was the case with the upcoming release of the Bin 23 Air Jordan 5 Retro. In a discussion with members of our footwear team, friend of the brand and longtime Jordan-head Alex Meacham talked about a memory that influenced how he rocked his favorite pair of Js.

The Air Jordan V has always had a special place in Jordan fans’ hearts with its fighter-plane-inspired design, and Meacham was no different. “Hands down. The black Jordan fives are my favorite Jordans of all time. Black fives with white laces,” Meacham said.

White laces? Meacham recalls a 1990 playoff game between Chicago and Milwaukee where Michael Jordan caught his eye by rocking his black AJ Vs with white laces.

“This was back when the players would wear tights that would go lower than their shorts. MJ was wearing long white tights and white laces on his fives in this game. I remember it looked sweet on TV.”

To add to the legend of the white laces, MJ ended up dropping 48 points in a hard-fought game. “The fact that MJ was just killing them with these white laces made me want to wear them. They just stood out so much.”

That summer, Meacham attended a basketball camp held for some of the top prep players in the country. Once he arrived, he realized that all of the best players were wearing black shoes with white laces. To Meacham and the players there, the white laces became a statement. “It was like you had to earn your white laces. You’ve got to be a baller to wear them.”

So with the Bin 23 Air Jordan 5 Retro drop, you know we had to bring it back with the white laces – a first for the 5s. The Bin 23 5s feature the classic black/black-metallic silver colorway crafted with premium leathers, and a no-sew technique on the updated black window on the upper.

For those who are true to the game, you can earn your white laces on the Bin 23 Air Jordan 5 Retros on February 18 at limited retail locations across the country. -Jumpman23