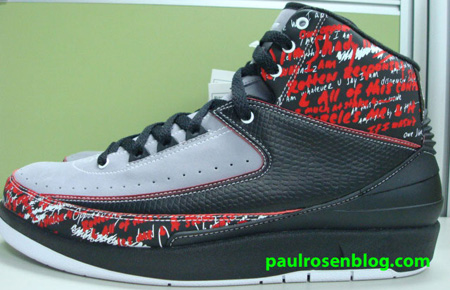 The Air Jordan 2 (II) was chosen because its Eminem’s favorite Jordan model, which marks the second collaboration between Eminem and Jordan Brand. The first you may have seen is the Air Jordan 4 (IV) Encore, which was given to friends and family of Eminem.

On to the Air Jordan 2 Eminem The Way I Am, the ankle collar and toe box features handwritten lyrics from Eminem songs, and a Black / Stealth – Red color scheme. For Em fans and Jordan fans, this pair will release exclusively at the Air Jordan Flight Club online, and limited to 313 pairs (Marshall’s area code in Detroit). A special Air Jordan x Eminem T-Shirt will also be available dubbed “The Way I Am”.

Proceeds from the Air Jordan 2 (II) Eminem – The Way I Am will go to the Marshall Mathers Foundation, which helps disadvantage children in the Michigan area. Retail price and a exact release date is still unknown, but it can not be too much later than October 21st, since Eminem’s book is launching. Via PaulRosen.

Editorial Note: We have received a large amount of emails asking how to join AirJordanFlightClub.com. If you have a cell phone, text Flight Club to 23623 and receive a invitation to join.