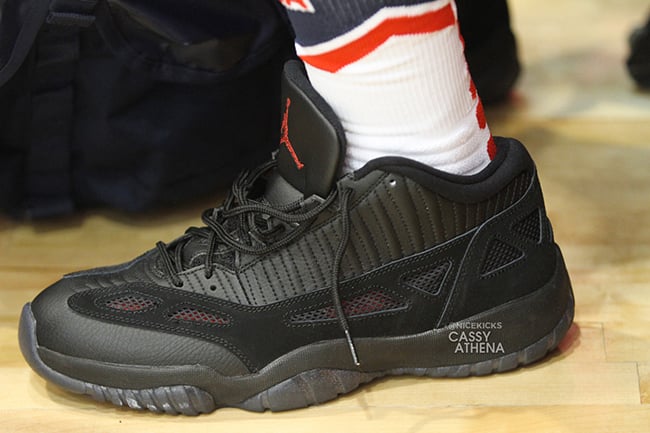 Chris Paul laced up a brand new pair of the Air Jordan 11 IE Low, which is expected to be a PE for him, but you know how Jordan Brand is, we could still see a release.

While some are stating this is a ‘never before seen shoe’, it’s not. Back in 1996, Nike made the Air Jordan 11 IE Low that is seen before us. A limited run was produced and known as the ‘Referee’ as NBA refs were commonly seen wearing this pair. The only difference between Chris Paul and the Referee pair is the material used on the overlays.

CP3 was spotted wearing this pair during the USA Basketball mini camp taking place in Las Vegas. As you can see, they use black throughout and even a black translucent outsole. Leather runs through most of the shoes while it appears nubuck lands on the overlay. In addition, a red Jumpman logo is used on the tongue.

We have already seen one pair of the Air Jordan 11 IE Low release (Cobalt) with a second coming in September (Black/Red). At this time there isn’t any information if the pair worn by Chris Paul will make it to retailers, but we will fill you in if it happens.