One of three releases on Thursday, October 4th 2012 was the Nike Flight One in Black White. If you are still unsure of purchasing this pair, maybe this video will help.

This particular Nike Flight One has a bit of history behind it. As you know this is Penny Hardaway’s shoe. In 1995 when Michael Jordan and the Chicago Bulls faced up against the Orlando Magic in the Eastern Conference Semifinals in Game 3, MJ laced up the Black/White Nike Flight One.

Reason behind Jordan wearing this pair was his Air Jordan 11 Concords did not match NBA color standard and he was being fined. He borrowed a pair of Flight Ones from Penny and actually cut the heel pull tab off that has the number 1.

The 2012 release of the Nike Flight One Black White features all black nubuck uppers. Small white leather accents graces the shoe with minimal white stitching around the Nike logo. Overall, the whole shoe pretty much contains all black with the “Nike Air”, Pods on the sole and Number 1 on the heel tab are in white.

Official colorway is Black/Black-White and retail was $120. A lot of people seemed to sleep on this pair as many stores still have sizes available. 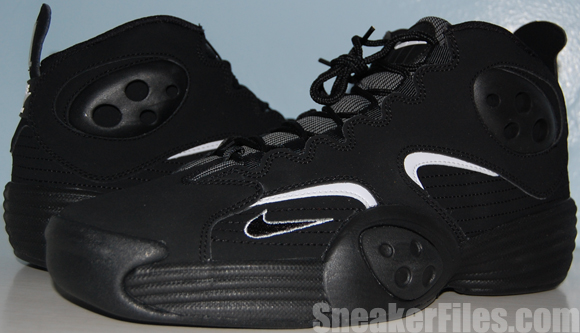