This isn’t the first time Nike SB and Pushead have worked on a project, nor the last. But today we show you another look via video of the Bleached Pushead Nike Dunk SB Low 2012.

Back in 2005, Pushead and Nike SB released a Dunk Low which was brighter and used different materials (2005 release had leather plus a quilted liner). The 2012 edition of the Nike Dunk SB Low Pushead features weathered suede materials, canvas on the toe box and side panels plus a rubber coating by the heel.

As far as design goes, the shoes have a “bleached” affect, this is where it’s nickname derives from. On the side of the shoe is a skeleton of what looks like a prehistoric animal (Pterodactylus maybe?). The loudest part of the Pusheads has to be the insole with his traditional artistic skull. Lastly, gold is placed on the heel, tongue and piping to give them more pop.

Official colorway is Black/Black-Filbert and retail price is set at $125. 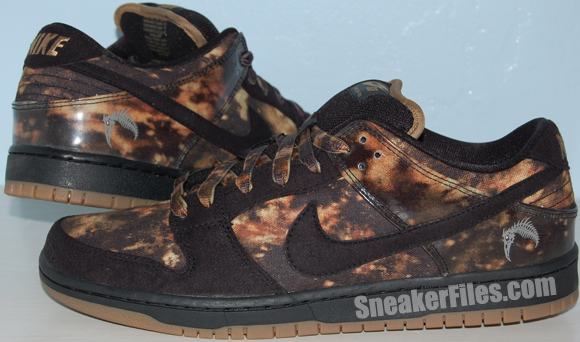