Today is the big day for Jordan 8 and Phoenix Suns fans because Jordan Brand is dropping the Air Jordan VIII ‘Phoenix Suns’.

When images first leaked of the Jordan 8 Phoenix Suns, many called them the New York Knicks. Yes, they do have similar color schemes but the reason they are actually inspired by the Suns will take us back to 1993.

Michael Jordan entered another NBA Finals match up, this time against Charles Barkley, Kevin Johnson and the rest of the Phoenix Suns. Needless to say Jordan and the Chicago Bulls won the series in 6 games (4-2) giving MJ his 3rd NBA Championship title. This shoe pays tribute to the series.

Moving on, the 2013 Air Jordan 8 Phoenix Suns uses a black nubuck upper with your traditional perforation, cool grey wraps the heel, we have a mixture of bright citrus and deep royal blue on the midsole, sole, and Jordan 8 emblem on the tongue. 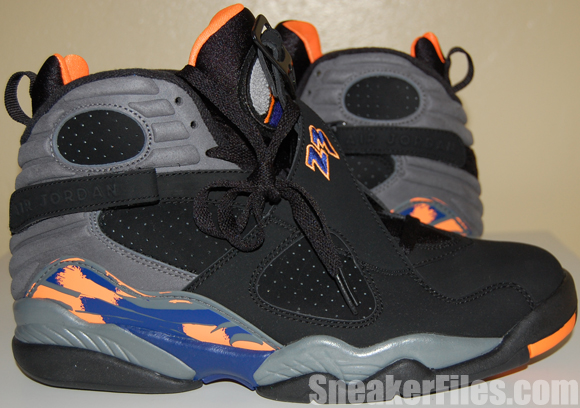