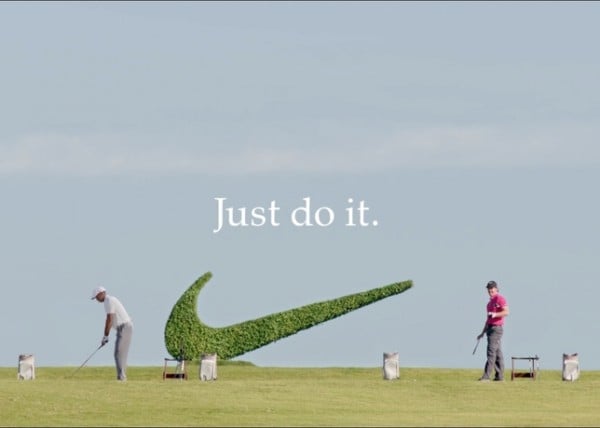 Comical for certain, watch Tiger Woods and Rory Mcllroy, two of golf’s best tee off in thier new Nike Golf commercial. And remember, no cup is safe!

On the heels of Nike Golf’s major announcement today that Rory McIlroy has joined its athlete roster,

The 60-second spot (30-second also available), produced by Wieden + Kennedy, is set to air from Wednesday, January 16 to Monday, January 21 on ESPN and The Golf Channel in the United States, on TSN in Canada, and on Sky Sports in Europe.  The “No Cup is Safe” piece showcases the athletic competitiveness, remarkable talents, and playful attitudes of the two best golfers in the world.

“I really like the ad,” Woods said. “It shows the fun side of us and I had a good time shooting it.”

“I’m genuinely excited about the first Nike TV ad I will be appearing in as a Nike athlete,” McIlroy said.  “The theme of the ad is really cool and it’s a great way to kick off my career at Nike.”

McIlroy and Woods are captured on the driving range lightheartedly taking turns to one-up each other by making amazing shots into a variety of different cups. The viewer is reminded that these two Nike Golf athletes can excite, engage and perform like no others in the sport today. While the ad displays their playful manner, it also conveys the competitiveness between two of the best golfers in the world.