Ronnie Fieg took to Instagram earlier today to show off an unreleased sample version of the ASICS Gel Lyte III “Selvedge” that dropped this past December. Similar to the version that ultimately made its way to retail, the kicks see a lighter denim base than the retail version while the remainder of the shoe appears the same. How does this two-tone version of the kicks compare to last month’s drop? 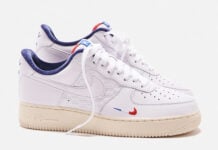