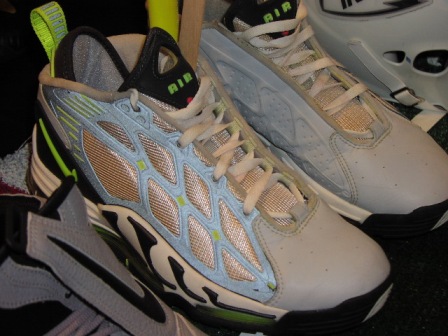 July 2000. I had just returned from a year in Texas, and was transferred to N.C.C.I .Gardner. This was a medium security prison which meant the dress code was more privileged, but you still couldn’t leave. We could have jeans, hats, sunglasses, and sneakers. Well, you could have it if you knew someone. After being processed I was moved to F building. F building had the reputation for being the roughest and out of control, it sat on a hill far away from all the other buildings. I pushed my cart with my mattress and what little property I had acquired. Into a dark hallway all the new faces grilled me as the C.O. told me my new bunk. I walked past this older dude with intricate cornrows and sneakers I could not comprehend. I wondered what kind the could even be, the swoosh was covered by the jeans.

It would take another 6 months before I would befriend his cellmate and have a reason to see them up close. You just can’t ask someone about their footwear, even asking “what size are those” could be enough to get you stabbed, if you are inquiring then you must want them and that’s just how it is.

Sweepy was a “lifer” and had been in Gardner for over 10 years. He wasn’t a very active dude, he stayed in his cell, or Umpired softball games in the summer. I recall holding the sneaker having a million questions and no way to answer them. Sweepy found it hilarious I would geek out over some shoes. He knew they were tight and that’s about it. I would run my fingers over the reflective 3M material, and peer into the neon air bubble. Making up stories that there is some new lighter than air gas used in the bubble now to make the shoe lighter. “How did you get these?” I would constantly ask… which would be followed by “Don’t ask questions in the big house”… I would spend another year in Gardner before being released… and on my last day some cop asked me what I was gonna do first. Jokingly I said “I’ma go to Footlocker and get me some of them sneakers Sweepy gots.” The cops laughed and said.. “Sweepy got them from Sgt. Dunbach, he’s a fucking snitch.”

I went to Eastern Boarder and got a pair of Josh Kalis DC’s instead.