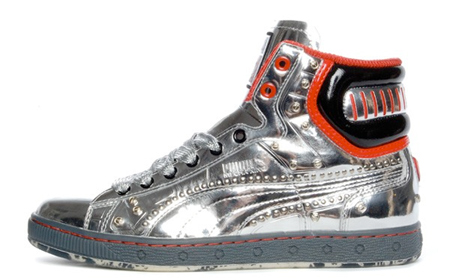 Puma recently released their “Monster Pack” at retailers worldwide, a celebration of Japan’s most prominent cinematic monsters. The Puma First Round Mid draws from the metallic Mecha King lizard; the reissue features a shiny silver upper and jeweled red accents. The misunderstood King Kong inspires the Puma Mid. The shoe’s all-black uppper is interspersed with slits that feature silky red underlays, while “gorilla hair” lines the heel panel and premium leather sets off the toebox and stripe. The German brand’s classic Clyde model is toned in a vibrant beige/powder blue/navy/red/yellow color scheme to match the Moth King, an aerial villain that had laser beams for eyeballs. The Clyde’s toebox is finished off by artificial moth hair. The Stepper is emboldened by the Terror King, a dual-headed monstrosity that’s similar to Scotland’s iconic “Nessy”. As such, the shoe’s upper is animated by a glossy brown snake print and inscribed details of the monster. Rounding out the pack is the First Round Lizoid King, (You see what I did right thur? Ehhh…) a shoe defined by a purple-green faux snakeprint upper, lucid red Puma stripe and teeth detailing around the ankle collar. 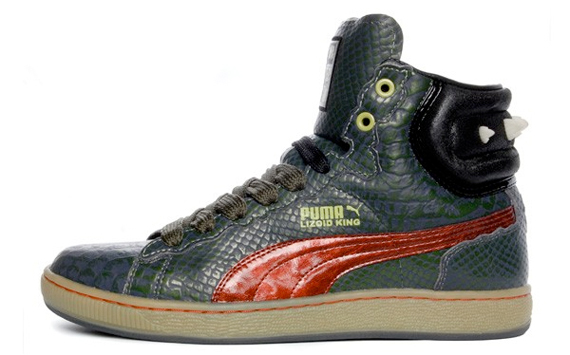