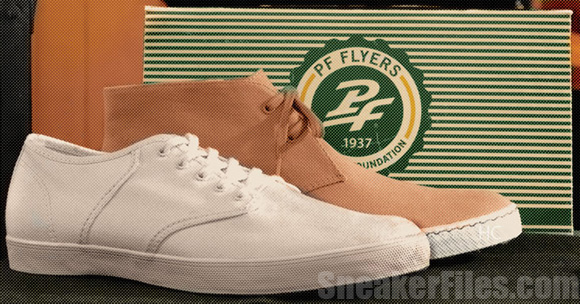 PF Flyers has partnered with Freemans Sporting Club (FSC) to reissue two archival styles from its 1949 catalog, the Taghkanic and Mohonk. FSC began as a group of friends who caroused above Freemans Restaurant on Manhattan’s Lower East Side. As a break from city life, they organized trips to camp, fish, and enjoy time in nature. When member Taavo Somer founded his menswear line, he named it Freemans Sporting Club after the traditional activities that inspired the group.

The Taghkanic is a revised saddle shoe, appropriately renamed after the classic New York lakefront destination for fresh air and recreation, available in Blue, Grey and Natural. The Mohonk is a streamlined version of the canvas rec boot and was named for FSC’s picturesque natural escape in the Appalachian Mountains of New York. Available in tan, grey, and natural. Both styles retail at $70 and $80 respectively.

For more information on this collaboration check out the microsite here. Available now at Freeman’s Sporting Club, Unionmade, and Conveyor.