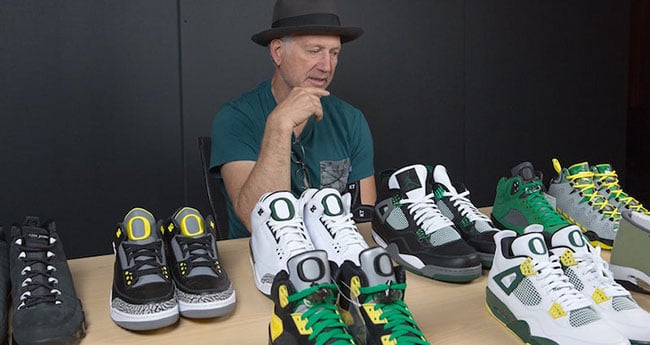 As the new academic year is upon us, Tinker provides a look back at the entire University of Oregon x Air Jordan collection.

If there are two things in his career Tinker Hatfield keeps closest to his heart, it’s the Jumpman and the Oregon Ducks. As a track and field star for the Ducks who has gone on to design some of the most iconic Air Jordan designs, the connection between the two are quite strong and evident.

Back in 2011, Tinker was helping think up new ways to outfit athletes during travel. Feeling like more could be done than the regular sweatsuits and Oregon-colored inline styles, Tinker shot for the stars and pushed to present the University of Oregon with some exclusive Air Jordans. 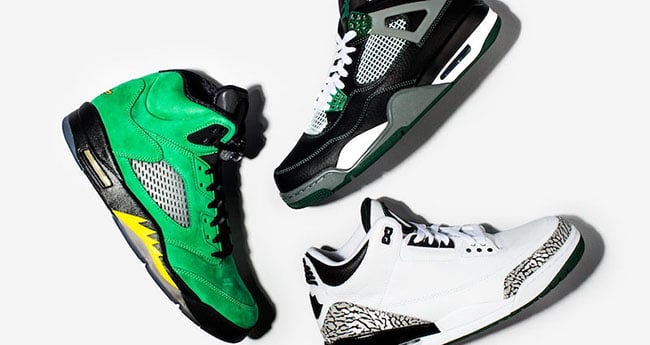 “I felt like there was something missing. It wasn’t really that exciting and no one was talking about it. And I felt like there could be this excitement driven by leveraging the history of the Jordan Brand, even though we aren’t talking about a Jordan school, but just the history of the brand and Michael Jordan himself,” Tinker explained as he looked back.

Since then, multiple Air Jordan classics have been given the Oregon Ducks treatment, igniting energy for the program while capturing the attention of collectors everywhere. 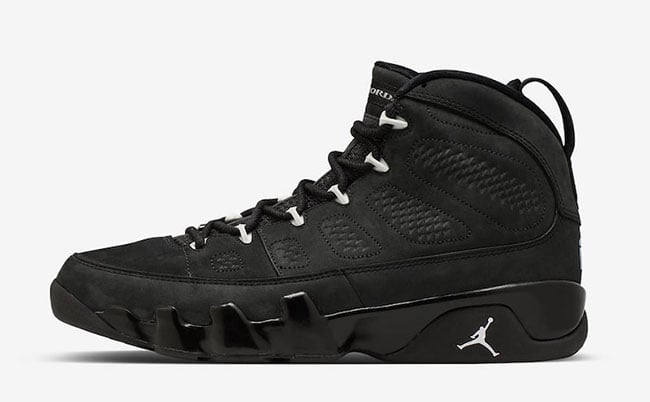 The Air Jordan IX marked the start of something special. Chosen by Tinker personally, the Air Jordan IX gave Tinker exactly what he needed. A simple silhouette that served the players in travel while providing a great canvas for his work.

The design was brought to life with the help of another former Oregon athlete, designer Jaison Williams. “I actually asked for some help from Jaison Williams, who is an ex-University of Oregon football player, to help ‘Oregon-ize’ these. I told him what I wanted to do and he did the artwork and the number, so that was cool,” said Tinker, as he reminisced on the first-ever Oregon Ducks Air Jordan. 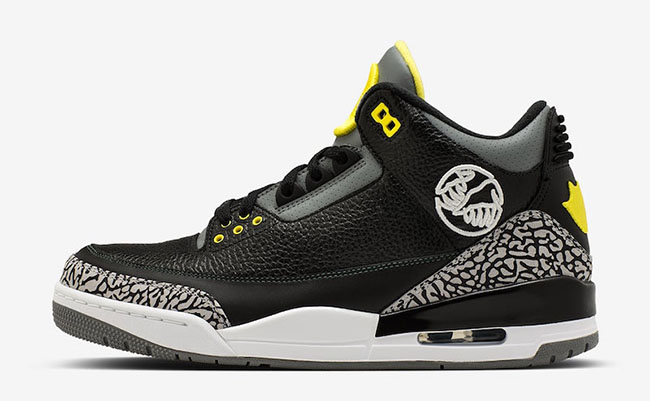 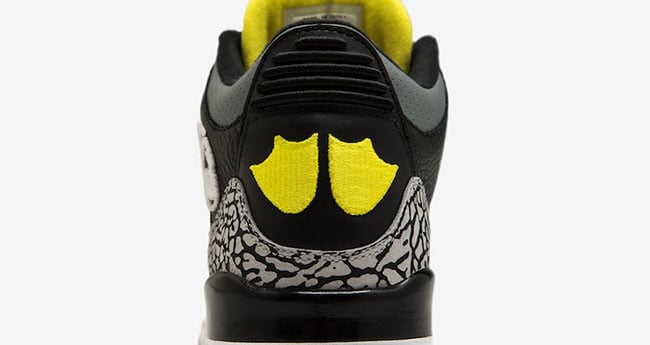 Once again, Tinker looked to those around him for help on the Air Jordan III’s design for the Pit Crew. “Todd Van Horne drew this logo up, which is two hands clapping, just to refer back to the Pit Crew. JWill actually added the Duck feet on the heel. Otherwise, I was just going to go with the ‘O’.” 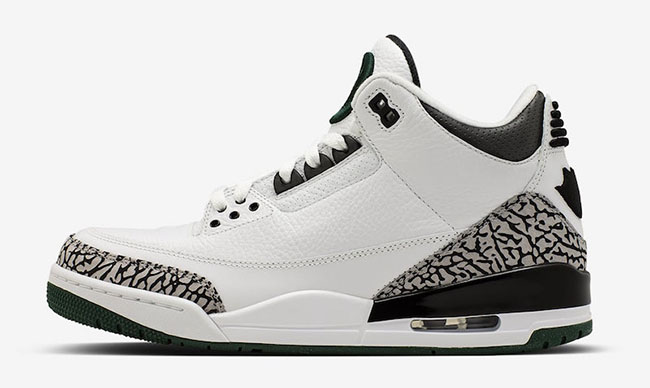 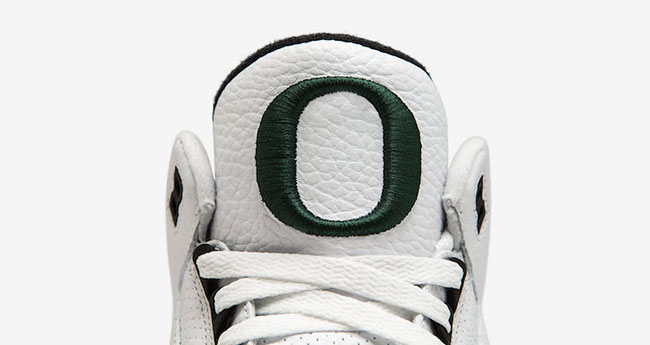 Done up at the same time as the Pit Crew exclusive, the white-based Air Jordan III was created as yet another exclusive for the football team. Once again designed as travel footwear, the design came to life in a versatile white finish with Oregon Ducks branding on the tongue and heel. 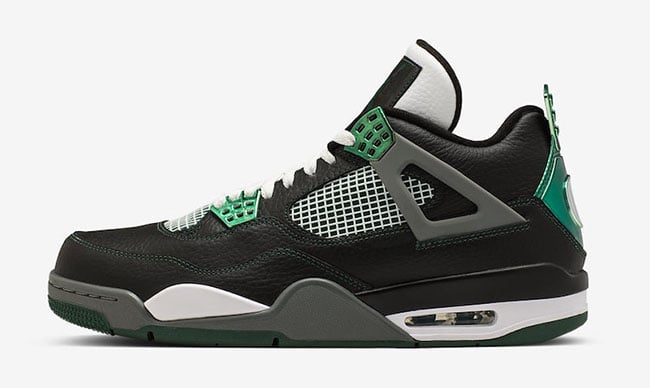 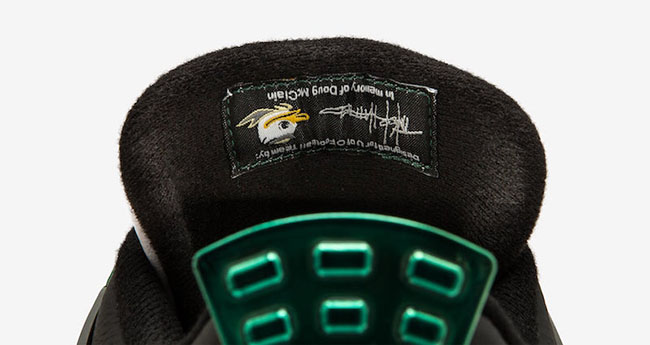 The Air Jordan IV is by far the closest to Tinker Hatfield’s heart. The design by Hatfield is dedicated to his dear friend Doug McClain, who passed away shortly before the shoe’s creation. “This guy was a diehard Ducks fan. We would go to the games together. When Doug passed away, I thought ‘Well, how much do these players really know about some of the fans that support them year in and year out, no matter the outcome?’ Doug was one of those fans,” Tinker revealed.

A U of O alum and a lifelong Ducks fan, Doug was remembered by Tinker with a simple but strong message taking over the Air Jordan IV’s inside tongue tag. But the project didn’t end there for Tinker. “If you look inside, there’s a little note that makes mention of Doug McClain. But that wasn’t enough, I actually went down and talked to the players and coaches. They heard the story straight from me and it was pretty emotional.” 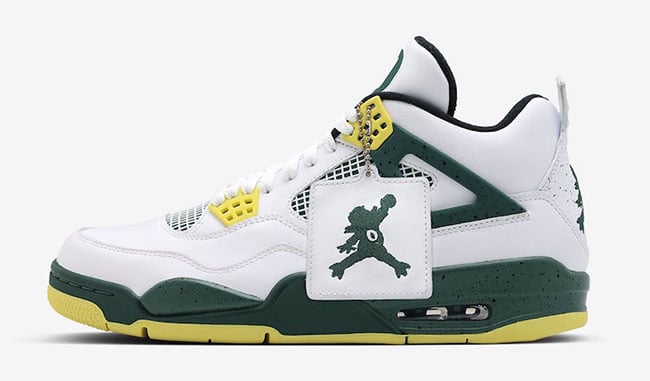 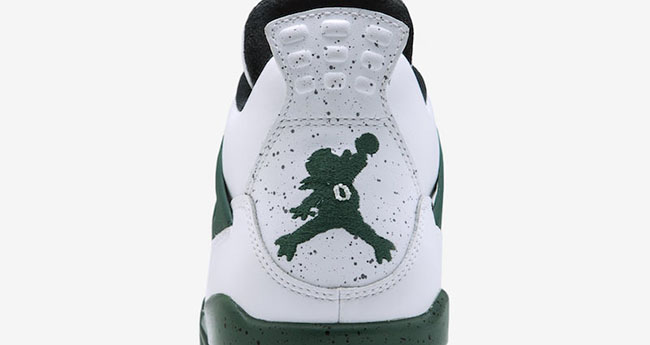 Alongside the beloved Air Jordan IV in black, the iconic Air Jordan design was also done up in white and made exclusively for the University of Oregon’s basketball program. “These came out in 2013, but just for the basketball team. Because Oregon was starting to excel in basketball, I thought it was maybe time we helped them in the same way we work with the football team,” said Hatfield of the design. 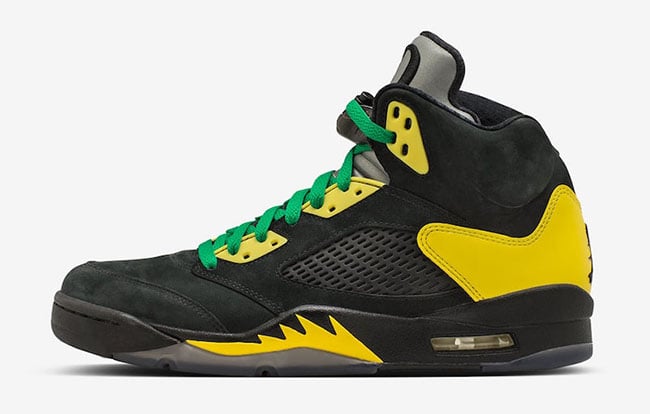 The Air Jordan V was also done up for the Oregon Ducks in a more traditional black-based colorway. The design elevated the silhouette with classic Oregon tones and recognizable Oregon branding on the tongue.

At the heel is a unique “Jumpduck” logo also designed by Jaison Williams. Respecting just how sacred the original Jumpman logo is, the Air Jordan IV and Air Jordan V are the only two styles to ever utilize the “Jumpduck” logo specifically created for Oregon. 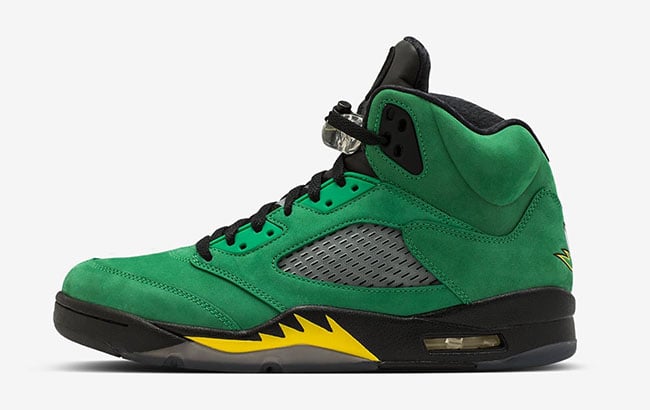 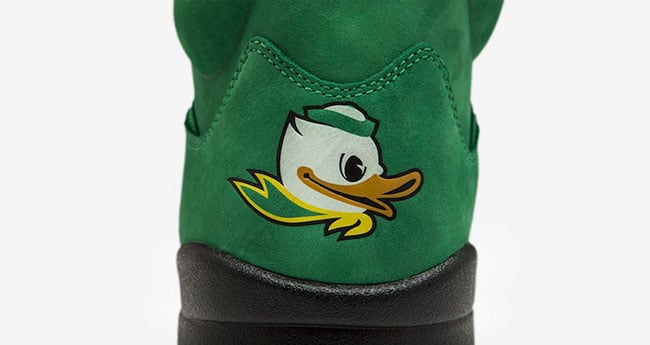 Once it was time to work on the Air Jordan V for the University of Oregon, Tinker was already prepared to take things in a different direction while still staying true to Oregon’s roots. “There’s a reason why these are either black or white, it’s so they are easy to wear. So I was like let’s just do a totally bright green one and put the Duck on it. Even though it was bright green, it was just a good departure from everything before it.” 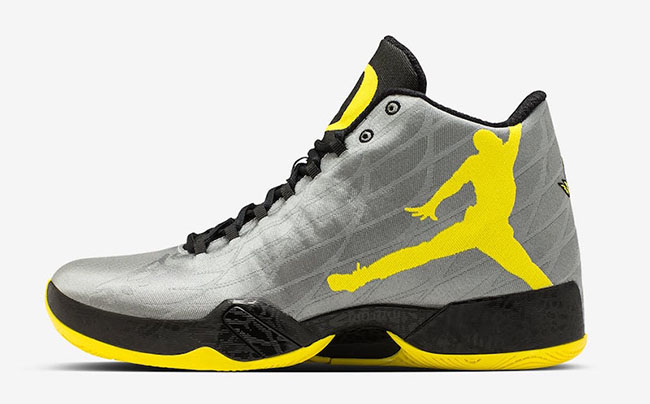 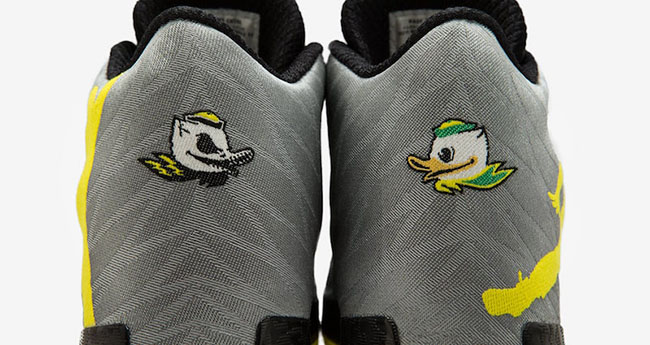 To follow up the initial series of retro styles for the Ducks, Tinker and team went the modern route with the Air Jordan XX9. Done up once again for Oregon’s football program, the Air Jordan XX9 features a tonal wing-inspired graphic with logo hits on the tongue and heel. 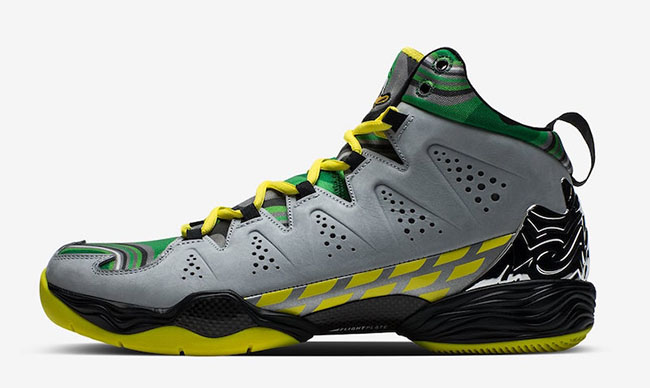 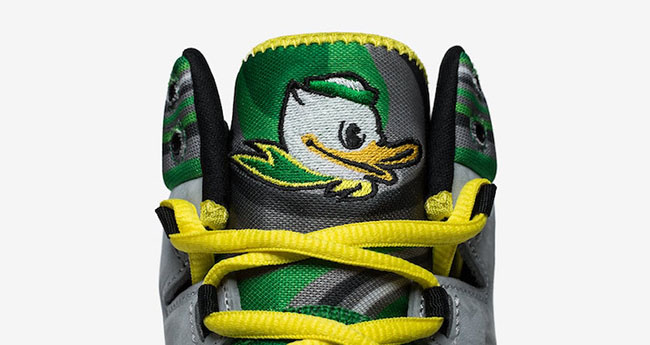 The next year, it was time another group of athletes got in on the mix. This time, it was the University of Oregon’s Track & Field program. To award and celebrate them, another performance model, the Melo M10, was Oregon-ized. The design features a unique graphic throughout the toe and tongue, and came coupled with an Oregon Ducks logo hit on the tongue. 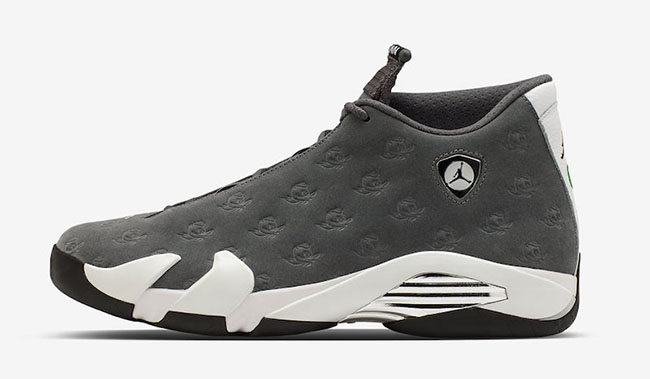 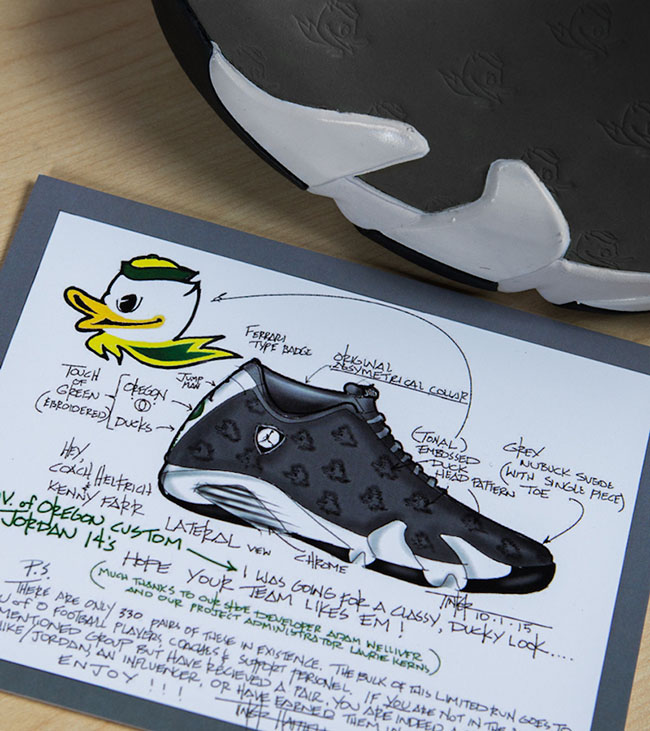 For the latest Oregon Air Jordan, Tinker called on the sports car-inspired Air Jordan XIV. The luxurious design was done up in grand fashion, complete with an all-over, embossed Puddles pattern. This grey-based version was exclusive to the football team and select friends and family, and was also accompanied by a very special message from Tinker.

“This card was a minor but important little component to this program, which essentially, in my lingo and with the sketches, explains who gets these things and why. In this case, there’s some responsibility put on the people who want these shoes to have to be a part of the program,” explained Tinker about the unique card accompanied by a sketch. 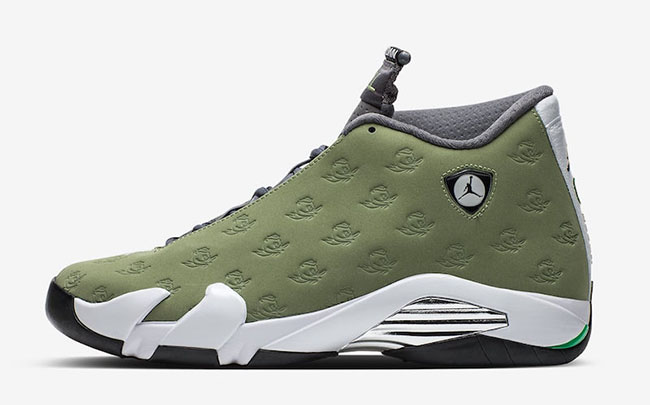 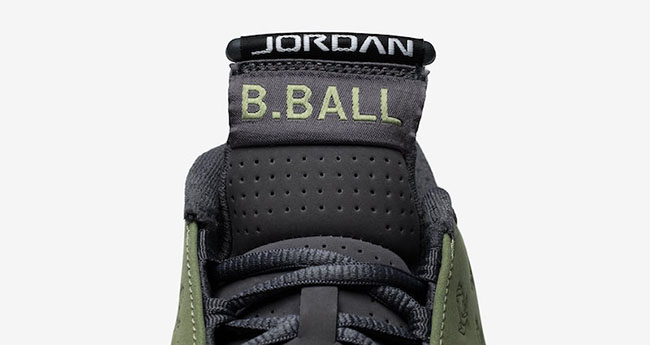 Looking out for other sports at the University of Oregon’s athletic program, Tinker also cooked up a matching Air Jordan XIV in a classic green suede finish. To set them apart, you’ll see the tongue features a specific call out to each sport such as “B.Ball” or “V.Ball” or “Track.”