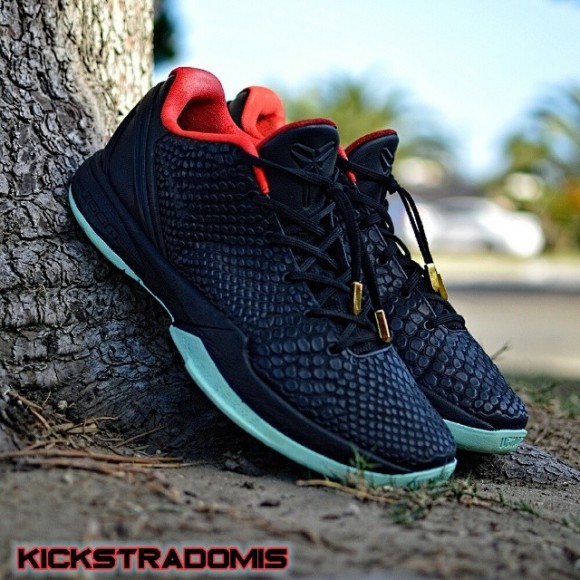 It’s been about two years since the original Air Yeezy II “Black Solar” kicks hit the scene, and they’re still giving sneakerheads a challenge for purchasing opportunities. These ultra-exclusive shoes disappeared much quicker than for how long they were hyped up, and have spawned a series of sneakers in similar colorways, like the Nike Air Foamposites Pro PRM “Yeezy.” If you haven’t been able to get your Yeezy-fix still, you might want to contact Kickstradomis for a pair of his Yeezy inspired Kobe shoes.

The Nike Zoom Kobe 6 “Kobeyeezy 6” customs by Kickstradomis feature black snakeskin all over the uppers, with the a familiar mint green and solar red accenting. Much like the original Nike Air Yeezy II “Black Solar” shoes, black is the dominate color, with snakeskin taking over the majority of the uppers, and an all black midsole to match. A glowing mint green outsole slips its way across the bottom of the shoes, while the eye-grabbing solar red ignites the inner lining. For the complete Yeezy effect, gold aglits cap off the lacing.

These are a pair of customs that Kickstradomis has become known for, and he’s currently taking more orders on these customs. Seeing as the original Black Solar Yeezy shoes are going for bank-breaking bids online, you might as well get in touch with Kickstradomis to get your hands on some even more exclusive kicks, and for a better price! 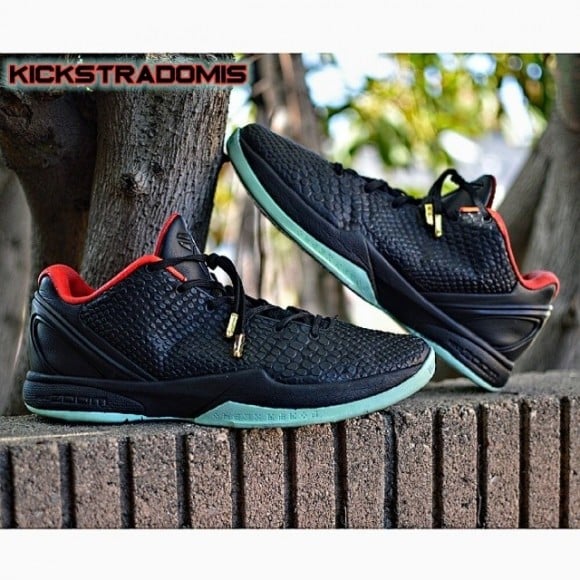