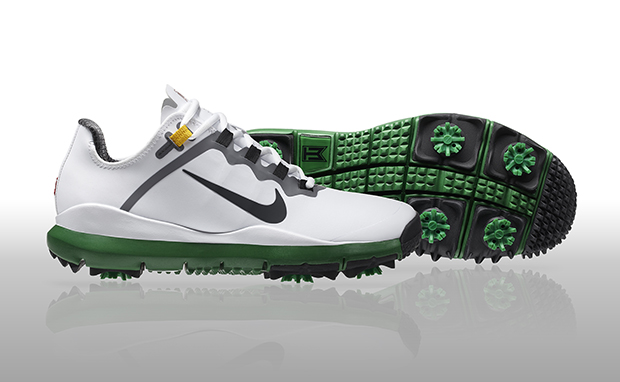 Inspired by the Nike Free series, this golf shoe sports a synthetic leather upper in white, contrasting hits of black, grey, and yellow, and a flexible green midsole. Priced at $180, the Nike TW ’13 Limited Edition is expected to hit select retailers and the Nike Store beginning March 28, 2013 with Tiger Woods competing in his first major of the season at the Master’s Tournament at Augusta National on April 11th.

Read the official press release of the Nike TW ’13 Limited Edition below and stay tuned to Sneaker Files for more on this release.

The Nike TW ’13 Limited Edition shoe (MAP $179.99) is crafted of waterproof multi-stretch synthetic leather in white, a NIKE FREE Inspired outsole popped in green, a touch of yellow on the top eye-stay and a hint of red in the TW logo on the tongue.

“The NIKE FREE Inspired TW ‘13 has done exceptionally well at retail with consumers raving about the performance of the shoe. Since its debut, we haven’t been able to keep the TW’13 in stock.  We decided to release a limited edition version to celebrate the first major of the season.” said Lee Walker, Nike Golf’s Footwear Product Director.

The inspiration behind the Nike TW ‘13 footwear began with Tiger Woods himself.  He asked for a shoe that gave him the same performance fit and feel as his NIKE FREE shoes when he runs and trains. That question ignited collaboration between Woods, Nike Golf’s footwear creation team and Nike’s Innovation Kitchen, led by Tobie Hatfield.

The NIKE FREE Inspired outsole is designed to mimic and conform to the natural motion of the foot, coupled with the protection and traction of a lightweight performance golf shoe. This innovative outsole delivers flexibility that allows the athlete to keep contact with the ground longer, unleashing the full power of their swing.