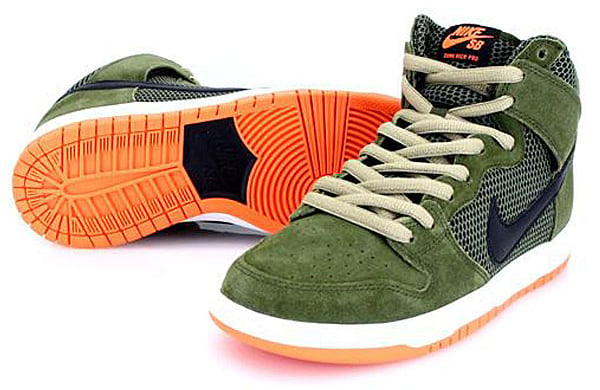 It appears that more Nike SB Dunk Highs will be inspired by the Air Jordan 5 and the next installment takes note from the Undefeated release, but is simply being called ‘Faded Olive’. Originally, the Air Jordan 4 released in collaboration with Undefeated. Later, JB dropped a pair of Jordan 5s that would be nicknamed ‘Undftd’ or called ‘Army Olive’.

The Faded Olive Nike SB Dunk High comes in a familiar theme, which uses the nickname all throughout the uppers. The side panels, tongue and collar is replaced with mesh, another nod to the AJ5. It’s hard to tell from the image, but it looks like nubuck is used up top. Following up is a white midsole and orange through the outsole and tongue branding.

At the time of writing there isn’t a release date for the Nike Dunk SB High Faded Olive, and more than likely will start showing up at Nike SB retailers in the next month.