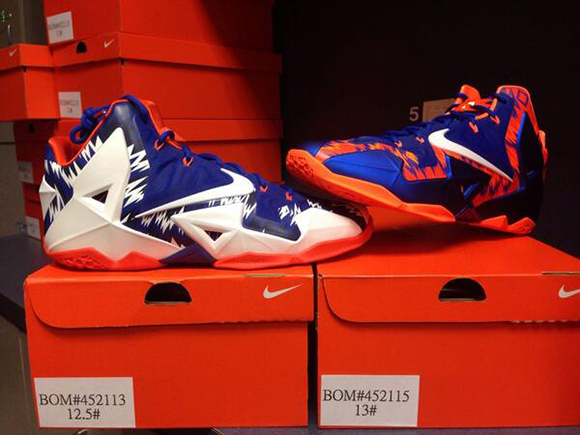 After seeing the Jumpman hook up UNC as they beat Kentucky on Saturday, it’s Nike Basketball’s turn to showcase some limited college kicks. Coach Billy Donovan took to Twitter to show us a glimpse of what will be on the team’s feet tomorrow night in Madison Square Garden as they take on the Memphis Tigers. There are two pairs that the team will be receiving including home and away pairs. The home version includes white panels around the midsole, heel and Nike Swoosh with an orange outsole and inner lining. The Gator’s blue takes on the most of the upper and the laces while white streaks accompany the upper outside of the hyperfuse material.

The away version is very similar just without the white. Blue covers the midsole, hyperfuse upper and laces with Orange taking the outsole and inner lining again. This time instead of the white streaks on the blue background, it’s blue streaks on a orange background. Safe to say Nike went all out creating the bad boys, so tune into ESPN tomorrow to catch an on-foot look at them.

Would you cop the LeBron XI “Florida Gators” if they were to release to the public? Tell us in the comments section below and stick with Sneakerfiles for updates on sneakers and more!