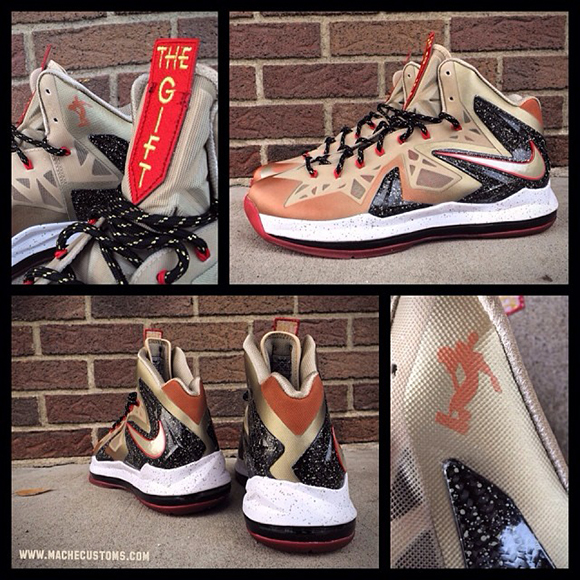 After seeing numerous custom Jordan’s by the custom king, Mache shows us an instant classic on a different kick for the most swole human on earth. Phil Heath owns the Mr. Olympia contest, winning three times in a row and for that he receives the nickname, “The Gift.” These LeBron X’s were made specifically for “The Gift” including the nickname running down the tongue as well as the Mr. Olympia logo near the outside ankle insert. Bronze takes up the toe cap and top of the heel but besides for that the upper is mostly gold with the hyperfuse, inner lining, Nike Swoosh and also the speckle on the black panels all using the signature 1st-place color. A black-speckled white midsole brings some light to the kicks whereas the outsole, tongue tag, lacing eyelets and Swoosh outlining all show hints of red throughout these custom beauties.

How do you like Mache’s LeBron X “The Gift” Customs for Phil Heath? Tell us in the comments section below and stick with Sneakerfiles for updates on everything sneakers!