Nike KD VI (6) “Road to the Gold” Customs by Kickstradomis 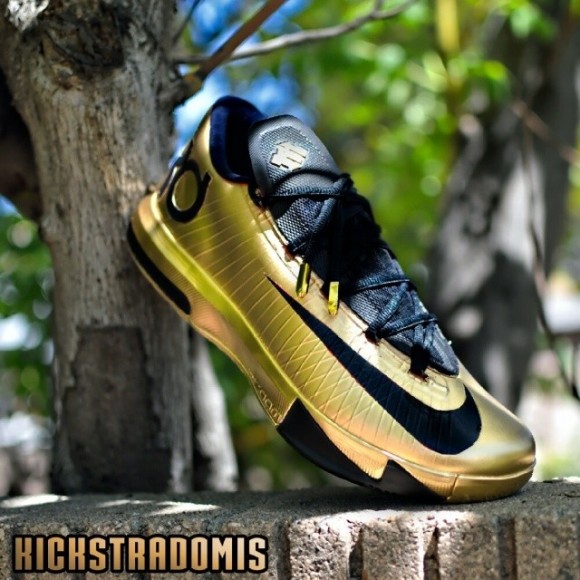 The KD empire just keeps on building, especially after Durant landed the cover for NBA 2K15. With his signature Nike shoes consistently selling out, and the OKC Thunder not doing too shabby in the Finals, it’s safe to say that KD is having one hell of a year, so far. Artistic Soles member, Kickstradomis, is applying an appropriate “champion” theme to a pair of KD6s, donning gold, head to toe.

The Nike KD VI (6) “Road to the Gold” customs by Kickstradomis are entirely metallic gold, both uppers and midsole, with black accenting throughout the shoes. A black tongue and lining help to tone down the dominance of the gold, while the metallic shimmer highlights to the raised lines that appear on the single-layer uppers of the KD6s.  Black makes further appearances along the rear of the midsole, in a black striping, and on the ridges found just under the toes, as well as the branding. For finishing touches, Kickstradomis added the current go-to sneaker accessory, gold aglit lace tips, to the black lacing.

You can never go wrong with a gold and black color combo, but these new customs from Kickstradomis are amazing! I don’t know if I’m just being bougie or what, but the tone of gold used is perfect for an all over application. Would these be a pair of trainers you’d wanna play a game in? Check out some more shots below, and decide for yourself! 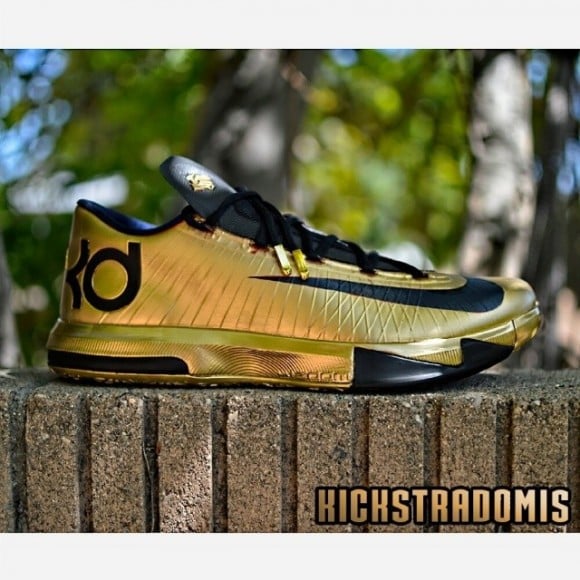