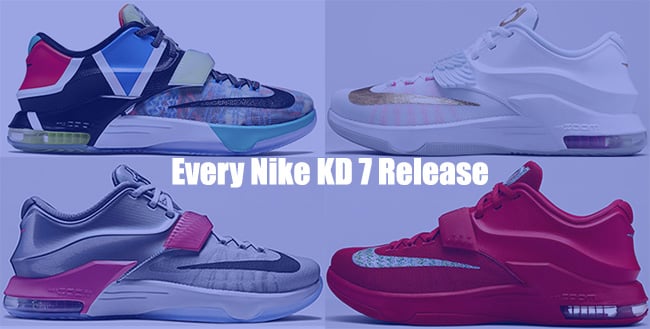 The Nike KD 7 was first introduced in 2014, during the summer. The last pair of KD 7s have released which are the ‘What The’ and have now moved on to a new model. You might still be interested in the history of the KD 7 which could be every colorway to release, how much a particular pair cost and the original release date. If you’re looking for any of what was listed, we have you covered.

Below is a list of every Nike KD 7 to ever release. This includes the Elite series, NSW Lifestyle, EXT and even kids exclusive. We also have an additional information you may be looking for.

The July 4th Nike KD 7 aka USA mixes it up with white mesh towards the front of the shoes while Hyperposite is incorporated around the heel wrap. Obsidian works its way on the strap and liner with university red on the branding and above the air unit.

From vivid volt accents to a Hyperposite shield and Nike Zoom technology, the KD 7 35,000 Degrees ultimately pays homage to Durant’s DMV roots with homestate branding on the outsole and a midfoot strap that reads Wanda, Barbara, Wayne, and Tony in honor of his mother, grandmother, father, and brother, respectively.

Dressed in an action red colorway, the Global Game latest version of the Nike KD VII features metallic silver accents and hints of blue throughout its Swoosh and tongue branding.

Due to its bright and playful colors, this KD 7 GS is known as Carnival. Using a mixture of hyper pink, hyper jade and volt makes the shoes pop, while a portion of the heel and tongue sit nicely in black.

The Grey and pink colorway of this KD7 is indicative of skies that appear tranquil before the onset of a powerful storm, though Duran typically remains calm even throughout a swirling frenzy on-court.

This pair actually draws inspiration from Benjamin Franklin’s when he placed a key on a kite.

Releasing at a more affordable price and inspired by China is the Nike KD Trey 5 II ‘China’.

Using double hazelnut along with hints of bright mango is this pair of KD 7 NSW Lifestyle.

Featuring a black base, action red and medium mint makes its way on the swoosh, outsole, liner, around the heel and KD logo.

When Kevin Durant was a child, he wanted to be a meteorologist and we have learned this through various Nike’s that released inspired by his once dream profession.

Using an Oklahoma City Thunder Away color scheme. General release and retail was $150.

The KD 7 N7 benefited Native American and Aboriginal communities in the United States and Canada, a program by Nike known as N7.

This KD 7 NSW Lifestyle comes in a black on black and metallic gold theme.

Although he didn’t take part in the 2014 FIBA, Nike designed a KD 7 inspired by winning the gold medal.

Using a combination of black, hyper crimson and metallic gold is a general released KD 7 Lifestyle.

The ‘Lightning 534′ is one of this years weather themed KD. When Durant was growing up he wanted to become a meteorologist this is why Nike kicks inspired by mother nature.

Some are calling this pair of GS KD 7s ‘Raptors’, but they feature hyper punch and hyper grape shades on the upper.

The Nike KD 7 EXT shown features an all black upper and gum outsole.

Kevin Durant’s collegiate career started in Texas and although it was not long, he still reps the school.

The KD 7 Christmas was inspired by Durant’s love of eggnog.

Being called ‘Clearwater’ or ‘Blue Lacquer’ for it’s shades of blue used throughout.

The Nike KD 7 ‘BHM’ celebrated Black History Month. Releasing in limited numbers, retail was $170 instead of $150.

The Nike KD 7 GS Peanut Butter and Jelly was a kids exclusive made for Durant’s love for the sandwiches.

The Floral Nike KD 7 EXT uses a satin upper and all over rose print. Both actually represent how Durant “rose above tough challenges to become the reigning MVP”.

Worn by Kevin Durant in the 2015 NBA All Star game. Limited release and an increase retail price of $170.

As a tribute to Durant’s aunt who suffered from Cancer, another KD model pays tribute to Aunt Pearl.

The Weatherman originally landed on the KD 4 and the brand continued to release sneakers inspired by KD fascination of meteorology.

The inspiration behind the KD 7 Electric Eel came from Kevin Durant’s electrifying on court ability and his love for animal prints.

The Easter Nike KD 7 comes correct with a flamboyant festive Hyperposite using a camo like mixture of vapor green and sunset.

The Team Nike KD 7 Elite was made for OKC. Using a blue graphite upper with extra perforation, bright citrus, dove grey and volt are hinted throughout.

The Flight Nike KD 7 uses classic charcoal for its main color. Following up is light retro on the eyelet, liner and tongue emblem. University red winds up on the double lightning bolts and other small accents.

The KD 7 Elite will release a model for the Elite Youth Basketball League, also known as EYBL.

Inspired by sky which in the world of basketball is equivalent to dunking. Featuring a combination of gym blue, obsidian and light retro, metallic silver is used on the swoosh, tongue and other references to KD.

Featuring a matte black through the uppers and midsole, the added perforation exposes hot lava. Metallic red bronze is used on the swoosh while the tongue uses a flame print. Last but not least is the addition of a translucent sole.

The Nike KD 7 Kids Frozens features a mixture of clearwater, blue lagoon, white and bright crimson. Along the Hyperposite wing is multiple ice creams which were Kevin Durant’s favorite growing up.

Mashing up past KD 7 releases, the Nike KD 7 What The uses a mixture of glow in the dark and 3M on the sides. Using a translucent sole and strap, black on the base with the toe box having a unique design which is then has a mesh overlay.