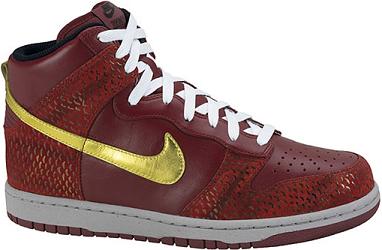 This holiday is, again, shaping up to be one for the AGES. Along with Jordan retros, Air Force 1’s, and Air Max’s, Nike also has planned to drop a couple of Nike Dunk’s on us this holiday season. Here we bring you a picture of yet another high-top Nike Dunk releasing during the holidays. It consists of a predominantly team red & burgundy-ish red upper, along with a gold Nike swoosh and grey sole. Topped off with white laces and what appears to be a fishscale patter along the upper, these are expected to be made available come December, 2009. What do you think of these Nike Dunk High’s? Could they have done something better?