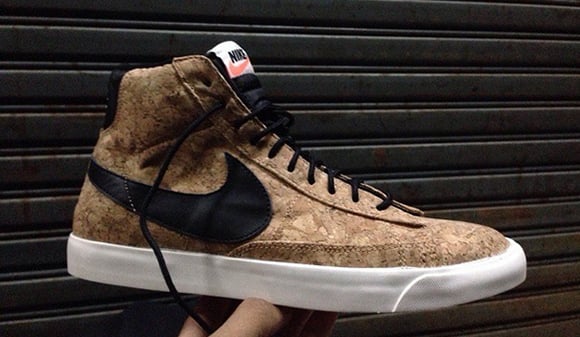 We have to wonder if Nike knew they would roll out cork on other models other than the LeBron 10. Since the release cork has hit the Air Max 90, Dunk High and now a pair of Blazer Mids.

We get why the LeBron 10 (LeBron won a Championship), The Air Max 90 (25th anniversary) and Dunk (30th anniversary). But why the Blazer? Originally releasing in 1973, they shoes are 42 years old. Either way, Nike doesn’t need a reason to cover the Blazers in cork, as we all know sneakerheads will eat them right up.

Consisting of Cork uppers, a black swoosh overlay hits the side while a white vulcanized midsole supports the shoes.

As of now there isn’t a set release date for the Cork Nike Blazer Mid, but overseas they have started leaking to retailers.