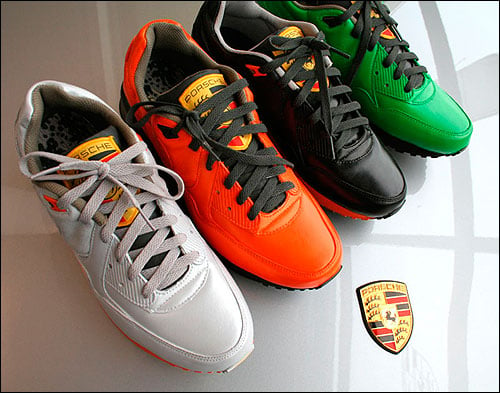 One day in history, Purchaze had his opening in Groningen at the 1st of September. On this day, the Purchaze owners met the Leyp staff and the owners of the Porsche store in Groningen. As a reflecton of the top quality, concerning their products and their service, the Purchaze store had a Porsche Cayman S for the promo team driving around. As a service back to the Porsche crew, Purchaze created the Nike Air Max Light GT3 RS. This car is being put on the market in four colors (silver, black, green and orange) and these colorways are also retraceable in the four pairs Purchaze and Leyp created together with Porsche. Just check all the details: You will find also the Porsche-Logo on the tongue.

On the 27th of December Leyp and Purchaze presented the four pairs to the Porsche staff, who are going to wear these kicks in their maintenance (crew of the racing team). All of the Porsche members were very thrilled about their GT3 RS shoes, also because these are even rarer than the exclusive cars they make. Porsche Netherlands announced this collaboration in the newsletter.