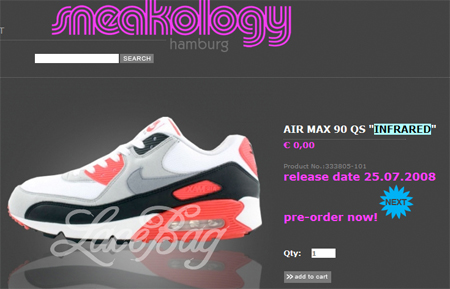 Lacebag has leaked information from Sneakology in Hamburg about a re-release of the much sought after Infrared Nike Air Max 90‘s. Many people believed these were to be released again, after the recent release of the Neon 95’s.

As many may know, the release of the 95 was an online release, this time around, JD Sports was lucky enough to be the ones to release the 90’s. Sneakology has given a July 25th, 2008 release date, but nothing is for certain. Via Sneakology.