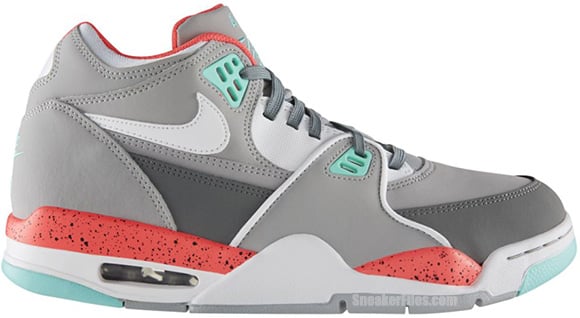 The Nike Air Flight 89 is without a doubt a classic. By the name you probably already know the release year, if not it was 1989 and was Nike’s way of allowing sneakerheads purchase a shoe that looked like the Air Jordan 4 at a cheaper price.

Now it’s 2014, through the years we have seen various colorways release of the Air Flight 89. Some nice while others eventually hit outlets. The newest pair to start releasing at retailers features this years popular colors of hyper punch and hyper turquoise while the uppers sport two shades of grey; wolf grey and cool grey.

Stores like Onesness have the shoes now while other Nike retailers will have the Nike Air Flight 89 Wolf Grey/Cool Grey-Hyper Punch-Hyper Turquoise.