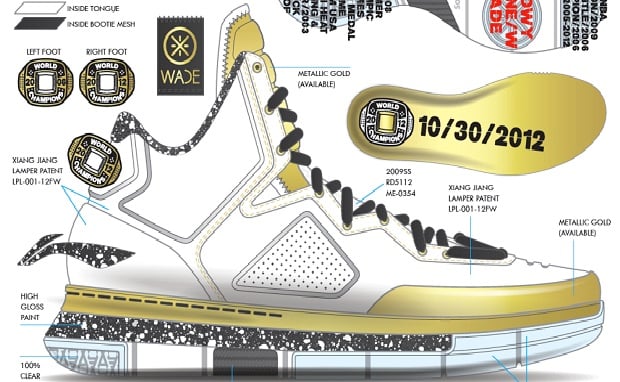 With first reports of the latest Li-Ning Way of Wade sneaker that pays homage to Dwayne Wade’s recent championship run out earlier today, we now know that these kicks will release as part of a “Dynasty” Collection Pack.

As early blueprints reveal the two sneakers included in the pack to feature white, black, and metallic gold colorways, there are slight differences between the two. By taking a closer look, you will notice alternating color schemes along the eyestays, midsoles, and heel branding. Besides that, both Way of Wade models will come with clear outsoles, 2 sets of laces, custom insoles, and custom outsoles that highlight Wade’s accomplishments.

Limited to only 40 “Dynasty” Collection Packs, the US market will have an opportunity to own the kicks for the first time by registering for an exclusive pass, only online at Li-Ning from now until  10:00 AM Central Standard Time on October 31, 2012. Lucky winners whose names are pulled will be notified via e-mail and will then be able to purchase their packs for $312.06, a number representing Wade’s jersey number “3″ , along with “12″ and “06″ representing the 2012 and 2006 NBA Championship runs. Visit Li-Ning for Official Details.

Keep it here with Sneaker Files for more on the Li-Ning Way of Wade “Dynasty” Collection Pack. 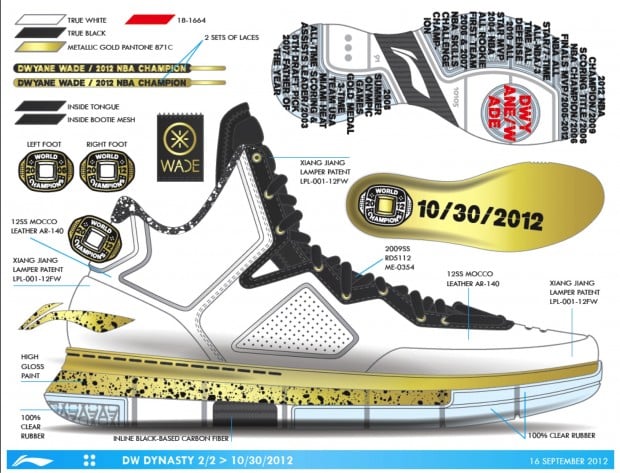