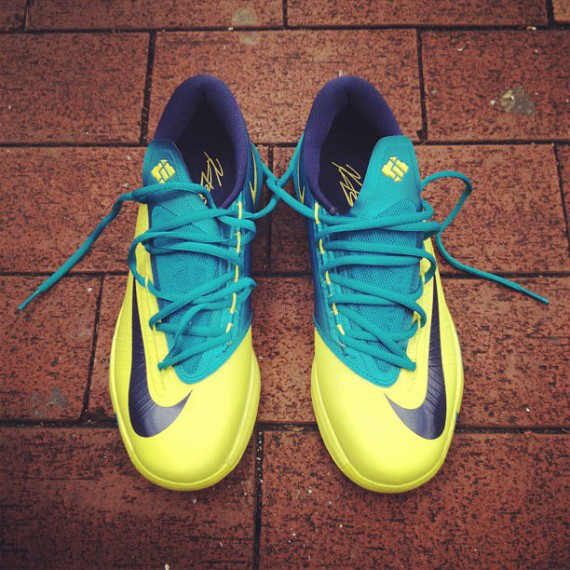 This past week revealed the looks of the upcoming Nike KD VI that is set to release into the sneaker market in July. Usually, signature sneaker lines, especially from Nike Basketball, stay true to the cut level of there lines from year to year. However, Kevin Durant’s signature sneakers are going against the grain every year and are trying to establish an unorthodox, albeit monumental, pattern in their designs. The KD line has seen a huge digression in pattern over the past 3 years. The KD III was a mid-cut basketball performance shoe. Only a year later, the KD IV proved to be very innovative. It became immediately one of the most popular sneakers to be introduced. The low-cut style acccompanied with the mid-foot strap for performance and stability were not only stylish, but effective as well. Then, in 2012, the KD V was introduced as it reverted back to a higher cut. Three totally different styles in three different years were put out in the name of Kevin Durant. What is to be said about the KD VI being low-top again?

Many people were upset about the KD V and how it didn’t match the hype of the IV. Consumers all over the world were disappointed in not only the style being mediocre in comparison to the previous style, but also how the price increased for a shoe that wasn’t nearly as sought after. After returning the low-top look for the KD VI, I think it is safe to safe that Nike realized that winning formula for Kevin Durant was a combination of low-cut and innovation.

The KD VI brings that innovation to the whole sneaker world as the design of the shoe is highlighted by an overlapping look on the tongue area. That, accompanied with the loved low-cut look, re-energizes the hype that surrounds the Kevin Durant signature line. So, does this mean that the KD V was a mistake or a waste of time by Nike? In the eyes of the fans that support Kevin Durant’s sneakers, I would say so. However, sneakerheads should be thankful for the KD V. That style of sneaker that played little brother to Lebron James’ sneakers, after being the virtual equal to the Lebron IX, set up a great comeback story for one of the NBA’s best players in the sneaker world.

What do you think about the KD VI? Does it make the KD V look like a bad idea?