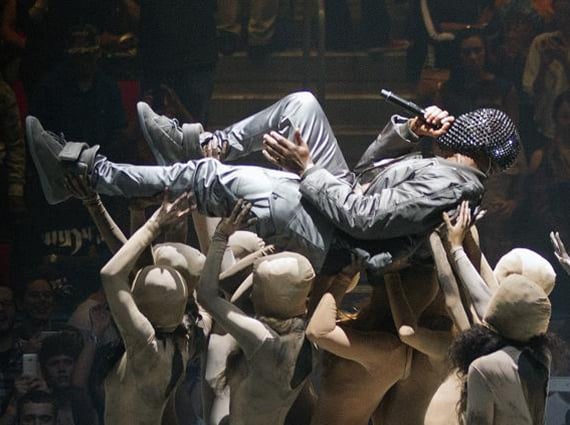 During his show last night at the Barclays Center, Kanye West brought even more clarity to the hot button topic of his current standing with Nike. No stranger to controversy, West accused Nike CEO Mark Parker of undermining the potential of the Yeezy line. As shocking as that might be, we can only imagine what that means moving forward.

With the rumor mill buzzing around the notion of Kanye leaving Nike to go sign with adidas, we can certainly assume that there won’t be a “Red October” release. If in the event that the motif does resurface, all of you sneakerheads may just see the concept grace a brand new adidas silhouette. During an interview with Philadelphia’s WIRED 96.5 radio station, West added even more fuel to the fire by saying that he had indeed signed a deal with a major company that would allow him to have even more creative freedom than he was afforded at Nike.

As more information begins to surface as we move forward, how do you sneakerheads feel about what Yeezy has been saying? Do you feel like his rants are justified? Could you see yourself copping a Kanye designed pair of adidas? Check out Ye’s interview and rant after the jump and be sure to sound off in the comments section below. Keep your browsers locked to SneakerFiles for more information.