HomeNikeFrom History to the Future of Force: The Nike Lunar Force 1

From History to the Future of Force: The Nike Lunar Force 1 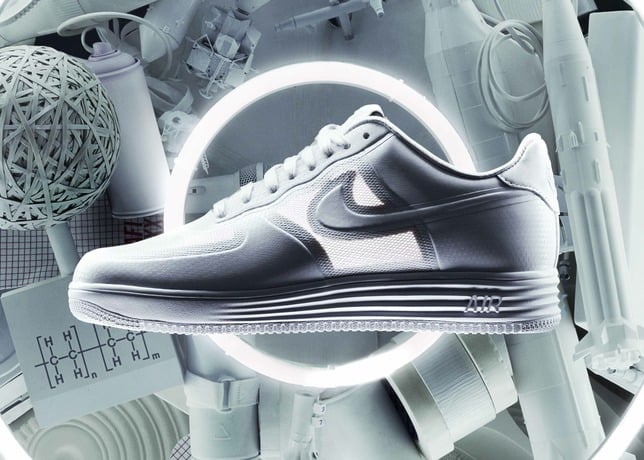 Following a number of looks, Nike presents an official look and tech info for the Nike Lunar Force 1.

Today Nike offers an advance look at the Future of Force with the Nike Lunar Force 1, a game-changing shoe that revolutionizes the iconic Nike Air Force 1 with Lunarlon cushioning and Nike’s Hyperfuse construction.

Redesigned from the inside out, the Nike Lunar Force 1 highlights Lunarlon cushioning in the midsole and outsole, which features trademark Lunarlon beveled ribs, enhancing flexibility and reducing the shoe’s weight. A Nike Zoom Air-Sole unit remains in the heel for superior comfort and reactivity. Simultaneously, Nike’s Hyperfuse construction transforms the upper with its unique unibody construction that fuses three layers —one for stability, one for breathability and one for durability—into one revolutionary, lightweight composite. In addition, the advanced design’s minimized seams mean less rub, while its distinct look allows for new embellishments and colorways.

Subtle refinements, including a slimmed toe box (reinforced to minimize signs of wear) and trimmed rubber outsole (cut from seven to five millimeters), further drop the weight of the Nike Lunar Force 1 from the original 17.56 ounces to just 11.7 ounces.  Calculated details, like an internal bootie, mean a superior fit without cinched laces. Additional understated distinctions such as a reflective Swoosh, underscore the new design while the classic sneaker’s integrity and signature silhouette remain intact. It’s still unmistakably a Nike Air Force 1; it’s just got more to offer.