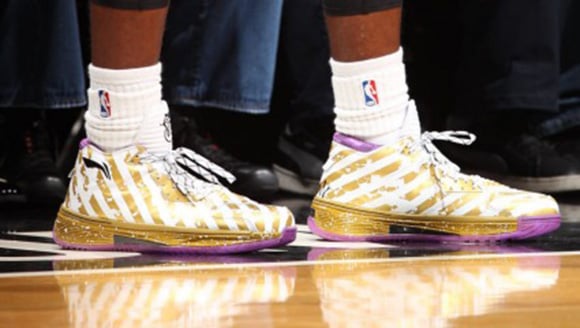 We have seen the Battle of the 11’s, we saw CP3’s Clipper’s Camo, and even Chris Bosh’s Player Exclusive Nike Hyperposites, but Dwayne Wade definitely went all out with his Way of Wade 2 by Li-Ning. Last night’s kicks were dubbed “Ring Night” due to the fact the Miami Heat were receiving their second straight ring (3rd of Wade’s career). Like most of the pair’s from last night, there was gold all over including the stripes throughout the shoes and a sparkling gold midsole with white speckle. A light purple on the inner lining and outsole made for an insane pair of sneakers, that makes us wonder what else Wade has in store for the 2013-2014 season?

Tell us how you feel about D-Wade’s Li-Ning “Ring Night” Way of Wade’s in the comments section below and stay tuned to Sneakerfiles for more on Way of Wade’s and all the other brands!