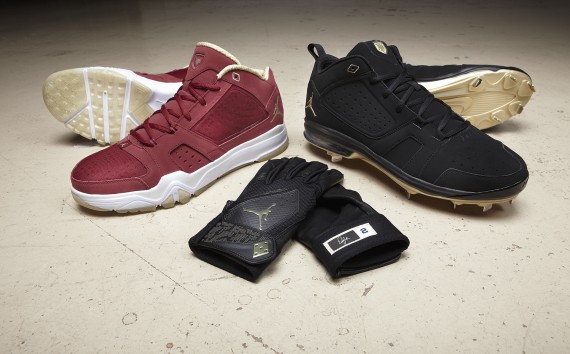 Derek Jeter is no stranger to practically anyone. Whether you follow Baseball or not, you’ve heard of him and his legendary status. And to add to that status, Jeter is 3 hits away from the 3,000 Hit Club mark. Impressive? Indeed. Derek Jeter will be the only Yankee to do so and will be the 28th player in MLB history to reach this milestone achievement.

To commemorate this event for his 3000th hit, Jordan Brand is set for him to wear a special edition pair of Jordan Jeter Cut cleats for that exact moment. This cleat features a black upper, gold cleat plate bottoms, and gold accents. Along with this special make-up, Jeter will also be wearing matching batting gloves for that 3000th hit.

The inside of the cleat will also feature a rare piece of documentation that skyrocketed his career – the mock contract that his dad drafted as day before his first  High School game, detailing his goal to become a better ball player and a better person. This document, along with a signature from Jeter and the words “I agree”, is laid out on the insoles and sockliner.

Jordan Brand will also be giving Jeter his own special PE of the regular Jeter Cut to pay homage to Kalamazoo High School. This Jeter Cut features a burgundy upper, gold accents and ice bottoms.

Both sneakers will be given to him in a commemorative box as he reaches the pinnacle of his career. These are one of one, but you can share the moment by purchasing a milestone teeshirt in the New york Yankee colorway.