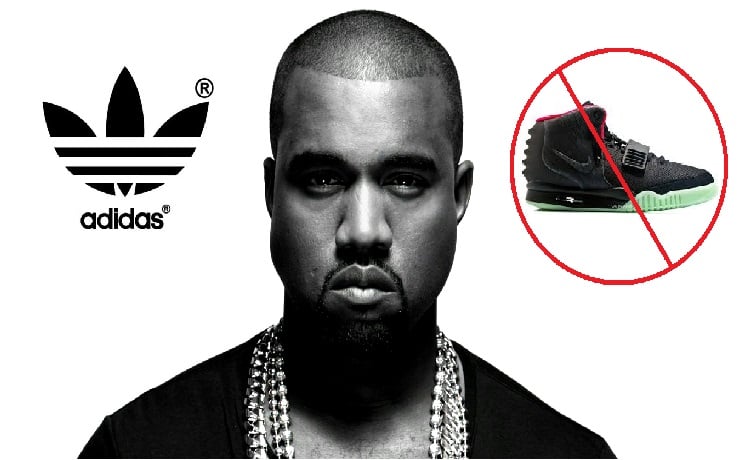 It seems as if the Nike Air Yeezy era is officially over.  Tonight, in an interview with New York radio station HOT 97, the Louis Vuitton Don himself announced that he will be signing a contract with adidas.  Said Kanye to host Angie Martinez,

“So then I start turning up in the BBC interview, so [Nike] said, ok cool, we’re gonna give you a bigger sandbox to play in. We’re gonna give you this amount right here to design, and two collections a year, and 30 skews — that’s the amount of items that you have. Would that make you happy, Kanye? And I said, well I need royalties. It’s not even like I have a joint venture. At least give me some royalties. Michael Jordan has 5%, that business is $2 billion. He makes a $100 million dollars a year off of 5% royalties. Nike told me we can’t give you royalties because you’re not a professional athlete. I told them, I go to the Garden and play one-on-NO-ONE. I’m a performance athlete. Did I really ANYTHING? YES! Did I really EVERYTHING. 100,000 percent. I’m 100,000 percent at all times. It’s people that work in offices trying to tell me how to think, when I got a better perspective. I live in Paris.

It appears as if Kanye’s bashing of Nike CEO Mark Parker at recent shows on the Yeezus tour has culminated in his walking from the company.  It seems ridiculous that Yeezy would not receive even a small percentage of royalties from Nike, and his frustration and confusion has led him to sign with their arch nemesis in adidas.  West will reportedly receive a definite percentage of royalties and more creative freedom in designing kicks and a clothing line.  It will be interesting, to say the least, to watch this saga unfold over the coming weeks and months.  R.I.P. to any hopes of a Red October release date.  Keep it locked to SneakerFiles for all the latest in the upcoming Kanye x adidas collaboration and sound off in the comments to tell us what you think about Kanye’s big move.