Jay-Z kept things clean and casual as he wore the Android Homme Propulsion Hi sneakers at a recent charity event. The Black Rock colorway, which released this past Spring 2011, features a rich leather upper, white rubber outsole, black accents around the tongue lining and ankle area, and is complete with its double velcro strap. Moreover, The Shawn Carter Foundation benefit carnival was held on the Hudson River waterfront at Pier 54 in NYC and attracted many of Jay-Z’s close celebrity friends  including Alex Rodriguez of the New York Yankees, singer, Estelle, and drummer/producer, Questlove to name a few. The event brought in over $1 million dollars which will go toward providing higher education scholarships to urban youth. 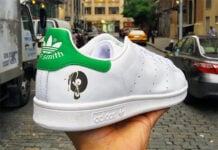