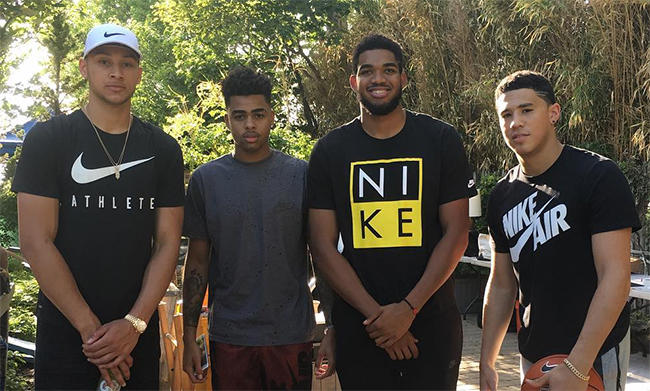 We are just two days away from the NBA Draft and one of the top picks this year will be Ben Simmons. While most expect him to go number 1 in the draft which would land him in Philadelphia, there is a chance he slips to second where the Lakers could grab him.

Recently, Ben Simmons signed to Nike which makes sense as his manager is the same as LeBron James and his personal friend. Before he officially enters the NBA, he and Foot Locker have came together for two new commercials. Also appearing is 2015-16 NBA Rookie of the Year Karl-Anthony Towns, along with D’Angelo Russell and Devin Booker.

One of the funniest parts of the commercial is when Russell takes Simmons phone and throws it out the window when asked for any advice. This of course stems from when D’Angelo secretly recorded Nick Young talking about cheating on his girlfriend Iggy Azalea.

Check out both Foot Locker commercials below and you will see who is drafted number 1 this Thursday, June 23rd.