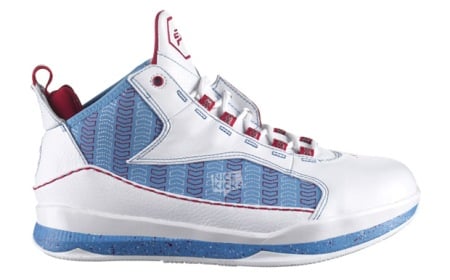 Chris Paul commemorates the relationship he had with his grandfather (who, unfortunately, fell victim to the murderous streets) with this version of the Jordan CP3.III. Called the “Chevron”, the shoe is white, powder blue, and deep red in color. My favorite aspect of the shoe is the ultra-kool arrow pattern that’s stitched into the 3.III’s middle. How has Paul’s injury affected your desire to buy the third installment of his signature shoe? He’s back on the court now, of course, but with him sitting out, were you not looking for his shoe on store shelves or online? Anyways, the Jordan CP3.III “Chevron” is available now at select spots worldwide.