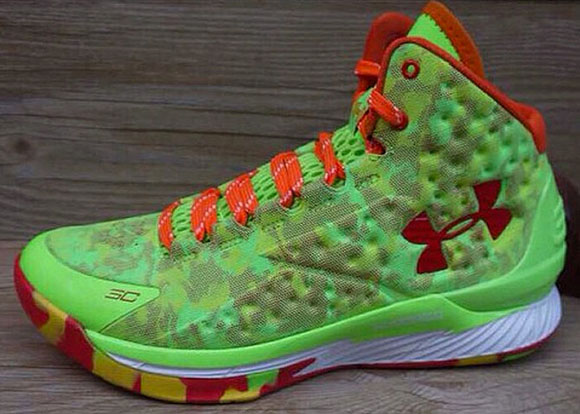 The images presented here of Stephen Curry’s new signature shoe, the Under Armour Curry 1 popped up on Christmas Eve, so everyone that he would debut them tomorrow. That isn’t the case as Curry will wear the ‘Blizzard’ ClutchFit Drive. So now we have a new color way coming soon.

CEO of Under Armour had said the Curry 1 would debut around All-Star weekend, so could this pair be the shoes he will wear representing the West? The official 2015 All-Star jerseys are out and the shoes do not match them, but that won’t matter. As you can see, the uppers feature multiple shades of green with red accents and a a partial white midsole. Yellow, red and green mix it up around the toe box.

For now, this Under Armour Curry 1 being an All-Star shoe is just speculation but we will continue to follow the line and update you.