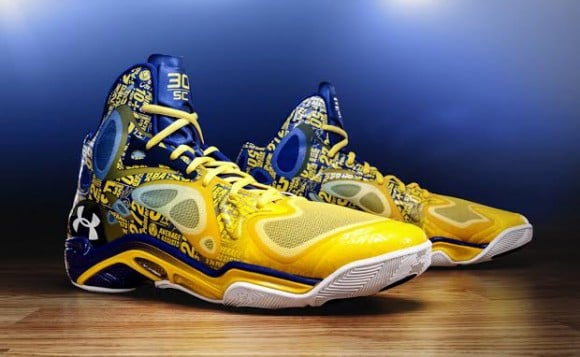 Just giving us a Purple Voodoo edition the Anatomix Spawn for All Star Weekend, Under Armour is returning this week with another release. The Under Armour Anatomix Spawn “The Zone” celebrate Stephen Curry’s return to NYC, reminding those of his 54-point game against the Knicks. Coming in a mostly yellow upper, royal blue dominates along the rear of the shoe, along the heel and ankles. Yellow graphic, word printing sits on top of the towering uppers, spelling out Curry’s acomplishments in the NBA. If you can’t attend the in store release at the 34th Street FootLocker in NYC, check online tomorrow at noon for these Anatomix Spawns to drop on the Under Armour store!