The Air Jordan IX (9) was the first model that was not worn by Michael Jordan. The Air Jordan Retro 9 (IX) Black, Light Olive and True Red is a color-way that was re-released by the Jordan Brand is often referred to as “Olive 9’s.”

The Air Jordan Retro 9 (IX) Olive are definitely one of the harder to find Air Jordan IX, this is due to the rare color-way and age. The Olive 9’s were originally released on March 9th, 2002 and retailed for $125. However, its rarity has caused its price to rise. 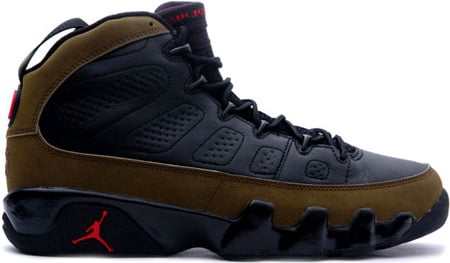