Only one of two, the Air Jordan VIII Low Retro’s are a lower cut styled Air Jordan VIII and shies away from the original design. The Air Jordan Retro 8 (VIII) Low White / Metallic Silver was originally introduced in 2003 and came in two different color-ways, one being white and metallic silver.

It appears very sleek and stylish with its subtle color-way, but it is not an original. However, it fits in well with the Air Jordan VIII style. The White and Metallic Air Jordan VIII (8) Low Retro was sold on June 21, 2003 with a price tag of $110. 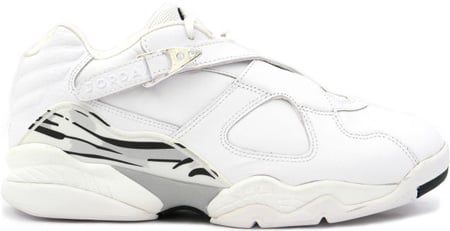