Chosen for the sneaker, was a peacock-like design which consisted of different shades of Green, Black snake skin, and Yellow accents on the outside and sole of the shoe. Seeing new versions of the Air Jordan II has been a pretty rare sight and for the release of the Doernbecher Charity II’s, quantity released was very limited. It’s release on November 9th, 2007 caused quite astir on the Internet and in-stores. The shoes sold out instant on Nike.com and were camped-out by many Air Jordan fans. 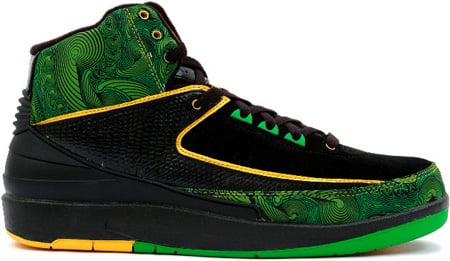