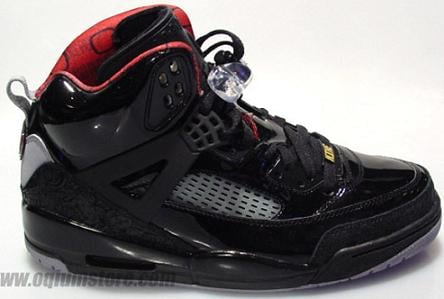 The Air Jordan Spizike is quickly becoming one of, if not the, most renown team Jordan silhouettes ever. Whether it be the colorway, or the materials used, or the concept behind it, it seems as though any and every Spizike garners considerable attention. In the middle of the summer we got a sneak peek of one pair that came in a rather busy colorway highlighted by flint grey and black patent leather used on the upper and midsole, respectively. Now we bring you a look at a pair of Air Jordan Spizike’s that sports an entirely black patent leather upper with a hint of red accents on the ankle lining. Some more subtle touches include a clear lacelock, clear netting, and a group of letters placed on the laces- although the word that they spell out still can’t be deciphered. As always, we’ll bring you the most up-to-date information regarding this sneaker as soon as we have it.