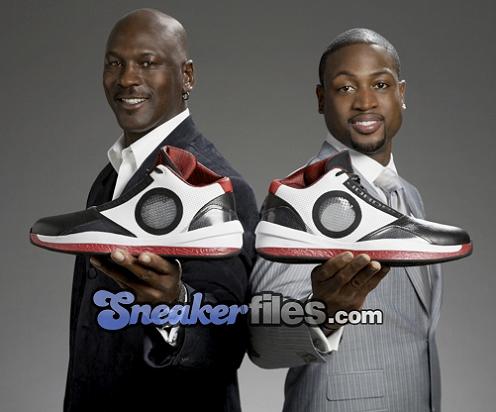 What started out as a mere rumor in late September of an Air Jordan 2010 sneak peek is now a complete reality. Many sneakerheads rejoiced once official word got out that Dwyane Wade had become an official Jordan Brand member. After all, Wade would finally be leaving a Converse brand fans did not think was doing the phenomenal basketball player justice. Moreover, becoming a JB member would also perhaps mean more Jordan releases in the traditional “bred” (black/red) colorway OG sneakerheads go simply gaga for. Well, now that Dwyane Wade IS part of Jordan Brand, both of those things have actually become a reality.

ESPN reports that Jordan Brand has specifically chosen Dwyane Wade to be the face of the campaign efforts behind the Air Jordan 2010, which will drop in its first colorway on February 13 of next year, with a $170 retail price tag. The face of the Miami Heat franchise basically since his rookie year, Dwayne Wade now feels humbled and honored to be the team Jordan Brand member chosen to debut the Jordan sneaker that commemorates the brand’s historic 25-year run. Via his Twitter page, #3 expressed his happiness at “standing side by side (with Michael Jordan) as a team.” We would like to congratulate Dwyane Wade on this honor and Michael Jordan on his brand’s success. All sneakerheads around the world await IMpatiently to see what else Jordan Brand has in store for us in 2010. Has all the hype made the AJ2010 a must-cop for you yet? Let us know what you think of the newest, unreleased Air Jordan silhouette. Also, let us know what OG bred colorways you’d like to see on the court and in stores once again, as perhaps an extended effort to celebrate Wade’s becoming team Jordan Brand.