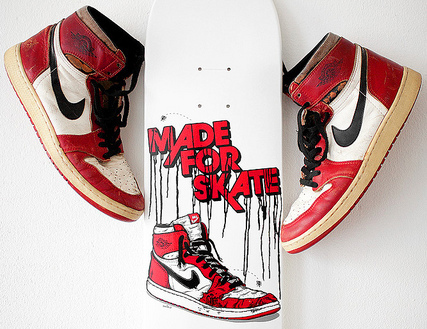 As every sneakerhead should already know, when the original Air Jordan 1 dropped in 1985, it instantly became a favorite among skateboarders. With its high top leather upper, the kicks were both durable and stable enough to standup to the daily rigors of skating.

As 2012 marks the 10 year anniversary of Nike SB, Nike SB and Jordan brand are supposedly celebrating the occasion by collaborating on an Air Jordan 1 SB, complete with the cored Dunk SB sole, tongue padding, etc. Rumors of the collab have been around for almost a year now, but the guys at NSB appear to have confirmed that the kicks will see a drop later this year.

What do you think of the possibility of a skate-ready Air Jordan 1? Would it be an instant “must cop” for 2012? Stay tuned to SneakerFiles for more info regarding the upcoming release.