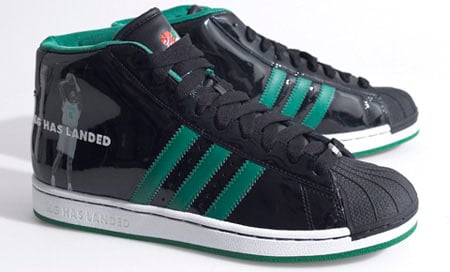 Some big NBA Player Transactions happened over the summer, one being Kevin Garnett playing for the Boston Celtics. Adidas is celebrating this by releasing a limited edition Pro Model designed around Kevin Garnett.

The Adidas Pro Model Kevin Garnett features shiny Patent Leather, “KG Has Landed” at the heel, and Garnett pulling up for a jumper. This Pro Model is an off court sneaker, so you will not see Kevin wearing them on the court. 900 pairs are set to release, via Complex.